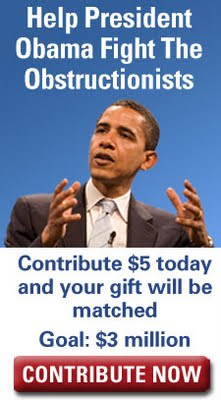 President Obama wants your help in his fight against "The Obstructionists" and the Democratic Party wants to raise 3 million to fund the fight.

Political fights are nothing new to the American Republic. Remember the Federalist Papers? Remember the arguments over states' vs federal rights and powers?

So what is different about this? Mr. Obama ran for the Presidency on the platform that he would unite the country. Instead, we find a growing polarization which the White House wishes to deny on the one hand and "fight" on the other.

One wonders about raising millions to fight those elected to office to represent and defend a political viewpoint held by many Americans. Seems downright un-democratic.
Posted by Alice C. Linsley at 7:06 AM