HELSINKI (Reuters) - Finland's government will require asylum seekers to work for free and to acknowledge a "national curriculum" on Finnish culture and society, it said on Tuesday, launching measures to tighten its immigration policy.

It will also regularly reassess conditions in the asylum seekers' home countries twice a year, and if necessary, cancel residence permits accordingly.

After its latest reassessment on Afghanistan, it said it would no longer grant subsidiary protection, claimed by people who say they face death or torture, to asylum seekers from South and East Afghanistan.

Read it all here.
Posted by Alice C. Linsley at 9:22 AM No comments: 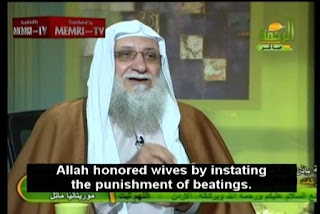 According to her testimony in the Hadith, Muhammad physically struck his favorite wife Aisha for leaving the house without his permission. His less-favored wives would have fared no better. Aisha narrates, "He struck me on the chest which caused me pain."

Muhammad's wife complained of the abuse that Muslim women suffered relative to other women. "Aisha said, 'I have not seen any woman suffering as much as the believing women.'" (Bukhari (72:715) Of course, she did not live to see the abuse of Christian and Yazidi women at the hands of ISIS.

Sheikh Yousef al-Qaradhawi, a famous Sunni cleric, said here that "It is forbidden to beat the woman, unless it is necessary." He went on to say that "one may beat only to safeguard Islamic behavior," leaving no doubt that wife-beating is a matter of religious sanction.

Nearly half Saudi women are beaten up by their husbands or other family members at home and many of them are hit by sticks and head cover, according to a university study. 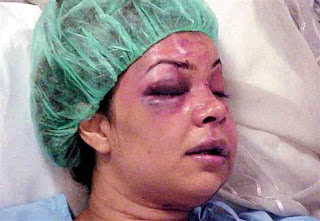 Photo of Rania al-Baz, a Saudi Television Channel One anchor, in a hospital after being beaten by her husband in 2004.

In its continuing attempts to make peace with Islam, the U.S. State Department erroneously reports "that although Sharia (Quranic law) prohibits abuse and violence against innocent people, including women…" it had to admit that "such violence and abuse appear to be common problems."

On Wednesday, December 2, 2015 Abdulrahman Ali kidnapped and raped a female gas station attendant in North Dakota while chanting Allahu Akbar. When the police arrived he claimed that the woman was his wife. He has refused to appear in court. Ali’s sister responded by claiming her brother was suffering from mental health issues. That is likely true, but it does not explain why he felt religiously justified in violating the victim.

It is time to face the facts about Islam and sexual abuse. Let us consider recent incidents.

In September 2015, a 31-year-old Moroccan “asylum seeker” was arrested for raping a German woman in the city of Dresden. According to a report carried by Radio Dresden, the attack took place on Thursday, September 17, at the Nossener Bridge in the Dresden. That same month, a 7-year-old girl was raped by a North African migrant in a German park.

Since Sweden opened its doors to mass immigration, rapes have skyrocketed, with many of the rapists being immigrants. The Swedish Crime Prevention Council, which compiles the nation-wide statistics, shows that rapes are up from 3,787 in 2005 to 6,697 in 2014.

A document made public by four organizations: LFR (Landesfrauenrat) Hessen, Der Paritätische Hessen, Pro Familia Hessen and the Landesarbeitsgemeinschaft Hessischer Frauenbüros, asserts that women and children at a migrant camp in Hessen are being raped by Muslim “refugees” on such a regular basis that they are afraid to go to the bathroom at night and have to remain fully clothed when they sleep.

The United Kingdom, which is also set to accept 20,000 more refugees, has numerous cases of Muslim rape gangs, including a Pakistani sex trafficking ring in Rotherham.  At least 1,400 children were sexually exploited by gangs of predominantly Pakistani men in the Rotherham area from 1997 to 2013.

In Telford, Muslims are responsible for drugging and sexual abuse of up to 1,000 children. A 16-year old victim, Lucy Lowe, died with her mother and sister after her abuser Azhar Ali Mehmood set fire to their house.

Related reading: Saudis Forced to Confront Wife Abuse; Facing the Facts About Islamic Extremism; Who Was Mohammad?; Is Islam Ethical?

Posted by Alice C. Linsley at 9:16 AM No comments: