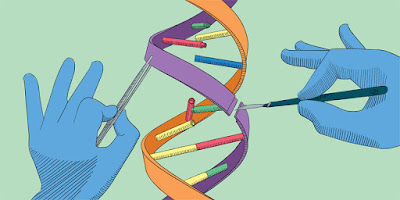 Bioethicists have voiced a global plea for a moratorium on heritable genome editing in the wake of the recent Chinese experiment aiming to produce HIV immune children.

From Science Daily. Read it here.

In an article in the latest issue of international scientific journal Nature, Professor Jing-Bao Nie together with another 16 academics from seven countries, call for a global moratorium on all clinical uses of human germline editing to make genetically modified children.

They would like an international governance framework -- in which nations voluntarily commit to not approve any use of clinical germline editing unless certain conditions are met -- to be created potentially for a five-year period.

Professor Nie says the scientific scandal of the experiment that led to the world's first genetically modified babies raises many intriguing ethical, social and transcultural/transglobal issues. His main personal concerns include what he describes as the "inadequacy" of the Chinese and international responses to the experiment.

"The Chinese authorities have conducted a preliminary investigation into the scientist's genetic misadventure and issued a draft new regulation on the related biotechnologies. These are welcome moves. Yet, by putting blame completely on the rogue scientist individually, the institutional failings are overlooked," Professor Nie explains.

"In the international discourse, partly due to the mentality of dichotomising China and the West, a tendency exists to characterise the scandal as just a Chinese problem. As a result, the global context of the experiment and Chinese science schemes have been far from sufficiently examined."

The group of 17 scientists and bioethicists say it is imperative that extensive public discussions about the technical, scientific, medical, societal, ethical and moral issues must be considered before germline editing is permitted. A moratorium would provide time to establish broad societal consensus and an international framework.

"For germline editing to even be considered for a clinical application, its safety and efficacy must be sufficient -- taking into account the unmet medical need, the risks and potential benefits and the existence of alternative approaches," the opinion article states.

Although techniques have improved in recent years, germline editing is not yet safe or effective enough to justify any use in the clinic with the risk of failing to make the desired change or of introducing unintended mutations still unacceptably high, the scientists and ethicists say.

"No clinical application of germline editing should be considered unless its long-term biological consequences are sufficiently understood -- both for individuals and for the human species."

The proposed moratorium does not however, apply to germline editing for research uses or in human somatic (non-reproductive) cells to treat diseases.

Professor Nie considers it significant that current presidents of the UK Royal Society, the US National Academy of Medicine and the Director and Associate Director of the US National Institute of Health have expressed their strong support for such a proposed global moratorium in two correspondences published in the same issue of Nature. The editorial in the issue also argues that the right decision can be reached "only through engaging more communities in the debate."

"The most challenging questions are whether international organisations and different countries will adopt a moratorium and if yes, whether it will be effective at all," Professor Nie says.