The Benefits and Drawbacks of Virtual Reality 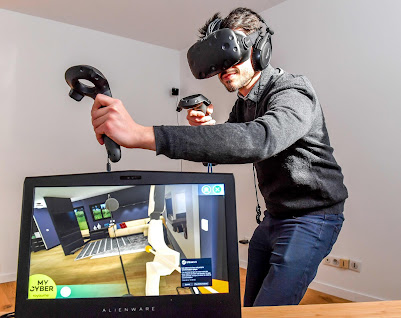 This month Ethics Forum will address the topic of virtual reality (hereafter VR). In this first article, we weigh the beneifts and drawbacks of VR.

VR has become a tool of neuroscience and is used to study changes in the brain. Neuroscientists from Harvard University were able to change the zebrafish's effort to swim the same distance in VR. Through this experiment, researchers determined which parts of the zebrafish brain are responsible for controlling their swimming behavior. They never could have performed this experiment in the real world time/space.
VR simulations are being used effectively in classrooms to teach physics and astronomy. Some corporations are using VR to train employees, including UPS, Walmart, Kentucky Fried Chicken, and ExxonMobil.
Extensive use of virtual reality by children raises concern about how their developing brains are affected. It does appear that VR has real-world consequences.
This 2015 study found that in VR, the individual's spatial selectivity is impaired. The study found that the firing frequency of neurons in a mouse is reduced by over two thirds. The study reports: "Selectivity to space and distance traveled were greatly enhanced in VR tasks with stereotypical trajectories. Thus, distal visual cues alone are insufficient to generate a robust hippocampal rate code for space but are sufficient for a temporal code."
In the real world, we see and touch objects at the same time, and the integration of these senses helps us gain a fuller picture of the objects. In VR, you can’t physically pick up and feel the objects that you see and so the brain receives significantly less information.
When it comes to gaming, it doesn't matter as much because the game is designed to focus the participant on selective tasks. Wearing the headset, the gamer is transported to a different world. Games that simulate three-dimensional scenes using stereoscopic vision enhance the excitement.
How the typical young gamer's brain is affected depends on many factors: environment in which the game is played, duration of play, frequency of play, physical movement, and mental engagement.
Another concern touches on mental health. Gaming is fun, but it is also a distraction from real life problems. It can become addictive to those who seek to escape their problems.
Glossary of Terms
Immersion: How well virtual reality is able to mimic or simulate the real world as we know it.

Cybersickness: A feeling of disorientation and/or nausea that can result from the illusion of moving through virtual environments. These unpleasant sensations can also be caused by lagging (or delays) between what your vision expects and what the virtual world presents.

Sensation: The different ways our body has of bringing us information about the world around us (for example, vision, hearing, touch, and taste), and the act of sending that information to our brain to perceive.

Perception: The process of our brain interpreting our senses into experiences.

Binocular Vision: Our left and right eyes are in slightly different positions on our head, and our brain is able to merge these two perspectives together much like looking through binoculars.

Stereopsis: Seeing in stereo. How our brain combines visual information from our left and right eyes into one single image.

Accelerometer: A device that can tell whether (and in what direction) something is moving.

Presence: How convincing we perceive a virtual environment to be.
Related reading: Immoral Virtual Fantasy: Should We Call the Cops?; Graham Wilson and Mark McGill, Violent Games in Virtual Reality.
Posted by Alice C. Linsley at 9:53 AM No comments: