The final paper is to be 5 pages and is due on Monday, October 10, 2016. There is no flexibility with this deadline as I need time to grade all the papers before the course ends.

Statement of intention/thesis statement - What you wish to show, demonstrate, prove, expose as false, etc. in this paper

At least 3 supporting observations, explanations, facts, quotations, etc. to support your intention/thesis, each with elaboration.

Posted by Alice C. Linsley at 1:57 PM No comments: 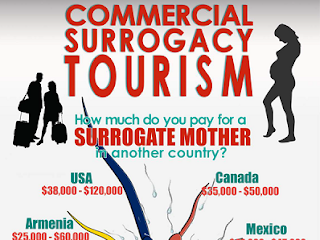 A government report has backed calls for an international treaty on surrogacy and for uniform legislation within Australia banning commercial surrogacy.


A Senate committee tabled its conclusions this week. In a nutshell, it backs altruistic surrogacy, but not commercial surrogacy. In a society where marriage and the family are changing rapidly, with many children lacking genetic connections with parents, surrogacy can be a solution for infertile couples, it contends.

However, the report left a number of issues in the too-hard basket. They include changing birth certificates to include all people who could qualify as parents – genetic, gestational and intended and making use of commercial surrogates overseas illegal.

Research shows that about 250 children from commercial surrogacy arrangements are brought back to Australia every year. Australia is powerless to stop this, argues the committee. The best the government can do is to give advice about the dangers of offshore arrangements and the possibility of abusing the human rights of the women involved.

Everyone agrees that fundamental principle of surrogacy must be the “best interests of the child”. However, there is a stark division on what those are. Some people told the committee that surrogacy in any form could never be in the best interests of the child because it creates confusion about his or her identity and is inconsistent with the United Nations Convention of the Rights of the Child. Others declared that it could be consistent. The committee sat on the fence.

Another issue is reimbursement for “reasonable expenses” for altruistic surrogates. The committee backed “appropriate reimbursement”.

Commercial surrogacy is a complicated and controversial topic. Ethical concerns arise on many grounds: the cost of adoption, the welfare of the infant; and the potential for exploitation of poor women.

In India the commercial surrogacy grosses over $1 billion each year. In October 2015, the Indian government announced pending legislation that would ban foreigners from exploiting poor Indian women or traveling to India on what the government called "reproductive tourism."  Read more here: How Commercial Surrogacy Became a Massive International Business

Posted by Alice C. Linsley at 6:46 PM No comments: