The Taliban Has Not Changed 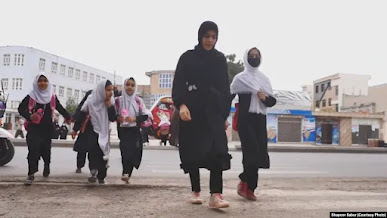 Afghan girls go to school in the western Afghan city of Herat on March 23.
When the Taliban returned to power, they promised a softer rule compared with their first regime from 1996 to 2001.
However, the Taliban has returned to its former repressive ways. They have imposed restrictions on women, banning them from many government jobs, policing what they wear, preventing them from traveling outside of their cities, and visiting medical facilities without a chaperone.
Taliban militants have erected posters in some areas to inform residents of the new regulations. In other places, insurgents have driven around with loudspeakers and made announcements at mosques.

Sara, a 17-year-old student, says the Taliban shut down her school in the district of Aqcha, in the northern province of Jawzjan, after the militants captured it two weeks ago.
Adeeba Haidari, age 13, feels as if she is in prison. She is one of thousands of jubilant girls who flocked back to secondary schools reopening across the country for the first time since the Taliban seized power in August.
But just hours into classes, the education ministry announced a reversal that left schoolgirls feeling betrayed and the international community outraged.
“Not only me but everyone you asked believed that the Taliban had changed,” said Adeeba, who briefly returned to Al-Fatah Girls School in the capital, Kabul.
“When they sent everyone back home from school, we understood that the Taliban were the same Taliban of 25 years ago,” her 11-year-old sister Malahat added.
“We are being treated like criminals just because we are girls. Afghanistan has turned into a jail for us.”
Read more here and here.
Posted by Alice C. Linsley at 6:42 AM No comments: