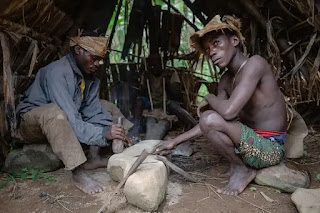 Batwa iron smelting in Buhoma, Uganda.
The conflict between people and policy is seen in stark terms in Uganda where the Batwa people have been forced off their traditional lands to preserve the habitat of Mountain Gorillas. Known as “pygmies”, the Batwa now live in misery as conservation refugees and are in danger of disappearing, even as gorilla numbers recover. The younger Batwa have no memory of life in the forests, but the elderly still yearn for the days of plentiful hunting and wild fruits.
Mathew Otineo of Kenya wonders if environmentalists care that the Batwa paid the ultimate price to save gorillas.

In 1991, nearly all of the Batwa were forcefully evicted, often at gunpoint by rangers from the Uganda Wildlife Authority. The three forests were designated as national parks to protect the endangered mountain gorillas who shared them with the Batwa. Never mind that the Batwa weren’t a direct threat to the gorillas or other endangered species.

Having never adopted formal systems of land ownership, the Batwa lacked title to their forests. Clearly taking advantage of this, the government of Uganda did not compensate them and abandoned them on the edges of the forests, with neither land nor the skills with which to make a living outside the forest.

In the years that followed, many of the Batwa died, threatening the survival of the tribe itself. Of those that survived, many fell into drug abuse, begging and prostitution. They soon had the highest HIV prevalence rate of any ethnic group in Uganda. This is exacerbated by limited access to healthcare and education. Only 10 percent of Batwa children in Uganda are in formal education.

Alongside these losses must be added the greater loss of contact with the home and legacy of their ancestors, which for most of the younger generation is now alien. The only legal way for a Mtwa (singular for Batwa) to enter the forest now is as a guide, on the so-called Batwa Experience at the Bwindi Impenetrable Forest National Park, in which they re-enact the ways of their ancestors for curious tourists.

The mountain gorillas of Uganda, on the other hand, have gone on to multiply. They now number over 400, accounting for nearly half of the over 1,000 now living in the wild. The species is no longer listed as critically endangered. The sacrifice of the Batwa people to the cause of great ape conservation has paid off.

The government of Uganda charges tourists up to US$700 to observe the gorillas in their habitat. Practically none of this money ends up in Batwa hands.
From here.
Related: Uganda's Batwa People See Little Government Support
Posted by Alice C. Linsley at 7:12 PM No comments: