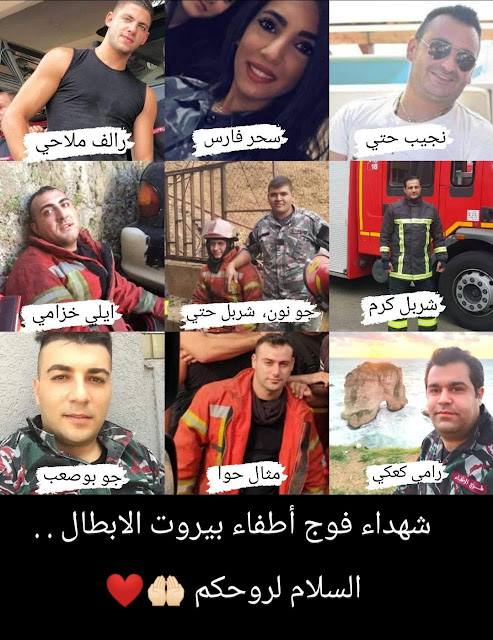 Beirut Explosion First Responders
Lebanese authorities have taken 16 people into custody as part of an investigation into the Beirut explosions that shook the capital on the evening of 4 August 2020. Officials say that the blast was caused by a huge stockpile of explosive material stored in unsafe conditions at the port.
The powerful explosion has been linked to an estimated 2,750 tonnes (3,030 short tons) of ammonium nitrate that had been confiscated by the government from the abandoned ship MV Rhosus and stored in the Hanger 12 warehouse for six years.

The blast was detected by the United States Geological Survey as a seismic event of 3.3 magnitude. Many buildings in the Mar Mikhael neighborhood were severely damaged or destroyed, as were grain silos storing around 85 percent of the country’s grain.
Health Minister Hamad Hassan said at least 5,000 people were injured in the blast and 154 people died but the death toll is expected to rise as search-and-rescue operations continue. The government of Lebanon has declared a two-week state of emergency.
The firefighters who first responded to the call were obliterated. When First Lieutenant Raymond Farah arrived at the port, the fire truck and the ambulance he had dispatched were evaporated. Farah reported, "The biggest piece of them we're finding is the size of a hand."
Brigadier General Najib Khankarli said, "Had we known that there was this amount of explosive material in the port, we would have acted completely differently. We would have called for an evacuation of the area and definitely we wouldn't have sent these young men and women in."
Human Rights Watch and Amnesty International have called for international experts to be involved in the investigation, citing a lack of trust in Lebanese authorities. I a statement on 6 August in Beirut French President Emmanuel Macron called it "a matter of credibility".
Related reading: Mapping the Damage; Can Hezbollah Capitalize on Beirut Crisis?
Posted by Alice C. Linsley at 1:11 PM 1 comment: