"There is not a moment without some duty." -- Cicero.


The term "deontological" comes from the Greek word deon, meaning "duty." This approach to ethical decisions holds that some moral principles are binding, regardless of the consequences. This concept is difficult for many students as evidenced by their tendency to try to combine deontological and other approaches. As one student wrote, "My approach to ethical decision making is guided by a blend of Consequential, Deontological, Virtue and other decision making processes. "

This student didn't realize at first that some approaches are mutually exclusive. When students try to employ all the approaches, it suggests that they don't really know what their approach is. 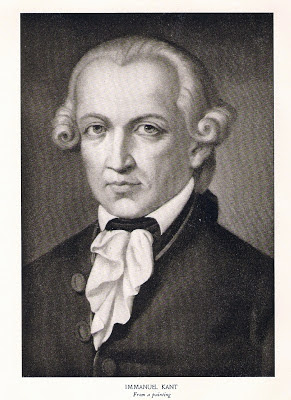 Everyone recognizes that they have duties and obligations.

Duty is the basis of Moral Law.

As all human have duties, the Moral Law applies to all humans

If you take a deontological approach to ethics, you must define your duty in each situation and then perform your duty, regardless of the consequences. You define your duty by asking "What is the universal principle to be followed?"

People who use the Ten Commandments as their ethical standards take a deontological approach. The problem with this approach is that it assumes, contrary to the evidence, we are always able to do our duty. But too often we discover that even when we believe that doing our duty will make us happy, we fail to do it.

After reading about the Deontological Approach, I understand it to be a very black and white approach to business ethics. We would assume in taking this approach that we are 100% able to do our moral duty. I'm not sure how realistic this is, but it is definitely interesting.

I was also glad to have the concept of mutual exclusivity explained a little further as well. This makes the approaches less confusing for me.

Keep in mind that Kant was a religious man who believed that each person would face their Maker and would be judged by whether or not they fulfilled their moral obligations.

Close to Kant is Gandhi's philosophy who promoted that the 'Voice of Conscience' or the 'still small Voice' which comes from within, is that which comes as a command and the agent is compelled to do ones duty.'Duty is the command of conscience'.