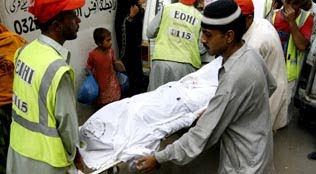 KARACHI, Sept 14: An act of charity turned into a tragedy near Karachi’s Khori Garden on Monday when a stampede caused the death of 20 women and girls who had thronged an outlet where a wholesaler was giving out food items for free. Fifteen people were injured.

Jodia Bazaar, the city’s biggest wholesale market, saw heart-rending scenes of poor families retrieving bodies instead of sacks after organisers of the free distribution were overwhelmed by the needy multitudes. “Tokens for free ration were being given away by the distributor at the rooftop of the rice dealer’s three-storey outlet while a 10-kg sack of rice was being handed to women from a nearby ground floor warehouse,” an eyewitness said.

The Kharadar police said that the rice dealer, Chaudhry Mohammed Iftikhar, a resident of the Defence Housing Authority, had been arrested and booked for “negligence and unintentional killing” of the women.

A woman whose seven-year-daughter was injured in the incident told Dawn that the stampede began at around 2.30 pm after the rice dealer left his office due to the unmanageable crowd, saying he would distribute tokens after Iftar. An injured woman said panic set in when a group of women tried to elbow others out of the way. This prompted a baton-charge by the trader’s employees, leaving a number of women on the ground. A stampede followed and in no time wails and moans rent the atmosphere.

The Capital City Police Officer, Waseem Ahmed, said that 18 people were killed in the incident. “Fifteen of them have been identified,” he added. The bodies and the injured were shifted to the Civil Hospital. Dr Hamid Padhiyar, a police surgeon, told Dawn that 14 bodies were brought to the mortuary and one of the injured women died at the hospital. “The bodies were handed over to the victims’ relatives after medico-legal formalities,” he added.

For a list of the dead, go here. May God have mercy upon their souls.
Posted by Alice C. Linsley at 4:45 AM