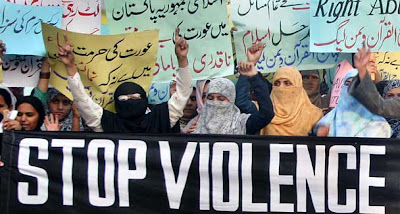 LAHORE: Three women, accused of prostitution, were tortured by an angry mob and were later forced to walk naked on Multan Road in Phoolnagar, Kasur, a private television channel reported on Monday.

A large number of people attacked a house in Jambarkalan village, torturing the women — including one Shahnaz — for alleged involvement in prostitution and running a brothel in the village.

The victims said the accusations against them were baseless. They said they had a property dispute ongoing with Union Council Nazim Ilyas Khanzada who wanted to occupy their house illegally. The women have accused him of planning the assault on their home.

Khanzada confirmed the women were tortured by the mob. However, he denied plotting against them.

Jambarkalan Police Sub-Inspector Bashir said a case had been registered against the women for running a brothel on the local residents’ complaints.

Meanwhile, no case was registered against the mob that attacked the women and publicly humiliated them.