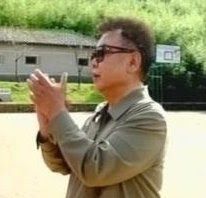 Kim Jong Il was last reportedly seen in public on 15-August 2008. On 24 August 2008 North Korea celebrated the 48th anniversary of General Secretary Kim Jong Il's start of the Songun [Army First] revolutionary leadership. On 26 August Pyongyang accused the United States of failing on its promise to remove North Korea from its list of state sponsors of terrorism and said it would immediately suspend disabling its nuclear facilities.

On 11 October 2008, for the first time in 58 days, North Korean media showed images of leader Kim Jong Il appearing in public. Simultaneously, the United States reached an agreement with North Korea to resume implementation of the 6-party accord after the United States agreed to remove North Korea from the terrorist list after 20 years and nine months.

The dark green foliage in the background suggested the photographs were taken in summer, not in autumn. The verdant grass and foliage in the background are unusual for fall, and is effectively indentical to the folliage seen in a similar set of photographs released 16 August 2008. Nor was there any indication as to what year the photographs were taken. Kim inspected a number of military units in the summer, including the 821st Unit supposedly shown in the pictures, in August and October 2003 and in July 2004.