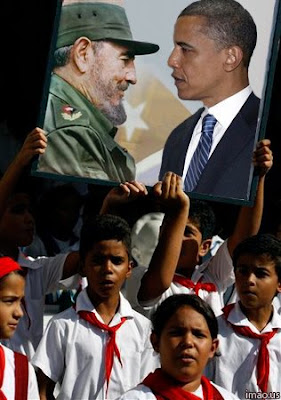 Here is one of my favorite photo-shopped pictures of Barack. What is Fidel looking at? And why is he smirking?

Did you know that Michele Obama's cousin is a rabbi in Chicago?

Did you know that the name 'Obama' is related to the Hebrew word for altar or shrine? His father was Kenyan. There are 50+ languages spoken in Kenya. The official languages are Swahili and English, but the majority of the languges fall into either the Nilotic or Cushitic groups which are cognate languages to Hebrew and Arabic. The Bible tells us that Moses had a Cushitic wife (in addition to his Midianite wife Zipporah). We know that the chiefs married half-cousins and patrilineal parallel cousins, it is likely that "bama" is in the Cushitic language group, which is a cognate language to Hebrew.

For example, Genesis 36 speaks of a famous woman who was an ancestor of Moses' half-brother Korah. Her name was 'Oholibamah' which means tent shrine. It is sometimes rendered 'most high tent'.

There is also a region in northeastern Nigeria, near Lake Chad, called Bamah. This is Noah's homeland according to local tradition. You may read more about that here and here.
Posted by Alice C. Linsley at 4:27 AM

Bama is also a place name in Nigeria near Lake Chad, which is Noah's homeland. The word 'bama' is found in many of the Afro-Asiatic languages.