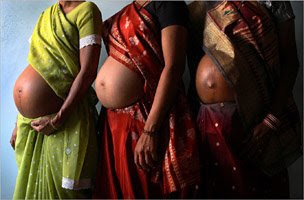 With the issuance of ART Guidelines by the Ministry of Health and Family Welfare, surrogacy arrangements have been made permissible in India. There is, however, no any law on the issue.

There is no study of the manner in which such practices takes place most of the information is based on anecdotal accounts and news paper / media reports.

Discussion
First and foremost, surrogacy has not gained popularity and is not pervasive in India, being a country which is over populated and has one of the richest genetic pools in the world. On the other hand countries which consider surrogacy as a major public issue are those where the population itself is declining and the genetic pool correspondingly declining as is the case in many European countries.

Next, the issue is of recent origin, linked to the availability of reproductive technology- the oldest living child born out of in vitro technology is not over 30 years of age, who has recently written about her experience. However, although surrogacy has not assumed the proportions of a major public policy concern, the question of infertility among individuals desiring a genetic child exists and therefore has to be dealt with by the law.
It follows from this that any law will focus on the right of individuals who are infertile and desire to have a genetic child. The issue then has to be viewed from the point of view of an individual. Does the “right to life” guaranteed in the Constitution include the right to procreate? Are there international instruments or norms on these rights? Does the right to procreate include the right to artificial insemination and creating a child through surrogacy?

However, the mere fact that it is not a fundamental right, does not lead to the conclusion that it is unlawful or that it cannot be legislated upon. Even if it is a fundamental right, restrictions can be put upon it in accordance with law. Here, while imposing restrictions by law, public policy does have a role to play in preventing any exploitative arrangements. Even commercial arrangements can be invalidated in the interest of fairness, more so, an arrangement which deals with human genetic material and the bringing into the world of a new human being.

This brings us to the question, whose rights are we dealing with?