US Economy is Competitive 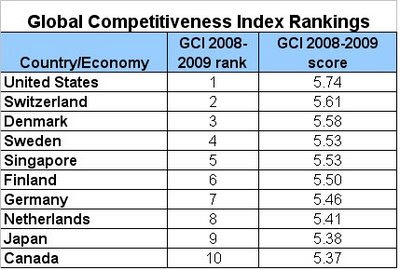 Mark Perry reports: "Despite the financial crisis, the United States continues to be the most competitive economy in the world according to the World Economic Forum's "Global Competitiveness Report 2008-2009." This is because it is endowed with many structural features that make its economy extremely productive and place it on a strong footing to ride out business cycle shifts and economic shocks. Thus, despite rising concerns about the soundness of the banking sector and other macroeconomic weaknesses, the country’s many other strengths continue to make it a very productive environment. The United States is ranked first for innovation, and its markets support this innovative activity through their efficient allocation of resources to their most effective use.

Bad News: However, the United States has built up large macroeconomic imbalances over recent years, with repeated fiscal deficits leading to rising and burgeoning levels of public indebtedness. This indicates that the country is not preparing financially for its future liabilities and is on the road to making interest payments that will increasingly restrict its fiscal policy freedom going into the future.

The three most problematic factors for doing business in the U.S. are 1) tax rates, 2) tax regulations and 3) inefficient government bureaucracy.
Posted by Alice C. Linsley at 8:30 AM

Email ThisBlogThis!Share to TwitterShare to FacebookShare to Pinterest
Labels: economy

Agreed, but its politically near impossible to get tax rates up to where they ought to be to get rid of debt and deleverage society. Likely though with the coming implosion, deleveraging will be near automatic, yet the debt will remain... albeit, as credit ratings waterfall, perhaps debt will be less and less of an issue.

Yet, in 5 years, likely we will have been through socialization and reprivatization of most finance and insurance functions, and are back on track to rebuild from scratch. Thats where the US success will shine. The problem is how to get from here to there with the least amount of collateral damage.

Yes, that is the problem and no one seems to have a strategy for rebuilding from scratch. I'm glad that you see this calamity as an opportuity. That's the way to view it, I think.