The Truth of Human Exceptionalism 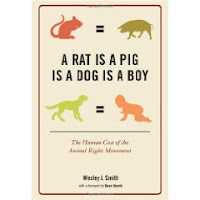 Our society rests upon the unspoken acceptance of a number of truths, like the rule of law, the authority of reason, or solidarity with our neighbours. One of these is so obvious that it used to need no defenders: human exceptionalism, the notion that humans are special and unique amongst living things. But today, animal rights activists are holding a big question mark over this hitherto undisputed truth.

Radical animal rights activists deny that there is anything special about human beings. Their campaign to grant animals rights is ultimately a campaign to revise Shakespeare’s assessment – “in action how like an angel, in apprehension how like a god! the beauty of the world, the paragon of animals” -- and disrobe him of any unique significance.

That is the argument of this important book. Wesley J. Smith distinguishes between animal welfare and the animal rights movement. The humane treatment of animals is something all of us should support. But animal rights is a worrying development. What looks like a noble and worthwhile crusade is at bottom really an anti-human ideology. It is in fact “a belief system, an ideology, even a quasi religion, which both implicitly and explicitly seeks to create a moral equivalence between the value of human lives and those of animals,” says Smith.

Smith is an American writer on bioethics and biotechnology with a dozen books to his credit. He is deeply suspicious of scientism, the belief that science has all the answers to our dilemmas, but he is not a knee-jerk opponent of progress. Rather, he is a humanist champion of "human exceptionalism". He has a keen interest in animal rights, as this is ground zero in the battle to defend the uniqueness of the human species.

The animal liberation movement is often extremist, utopian, and open to the use of violence. For those who are still trying to figure out the quirky title of the book, it has been taken from a 1986 quote from the head of People for the Ethical Treatment of Animals (PETA), Ingrid Newkirk. All four are mammals – end of story.

The true believers in the animal liberation movement are not gentle dog lovers or cat owners. They are fanatics who are capable of harassing, vandalising and destroying anything they consider to be abusive to animals. Indeed, Smith warns us of what sort of world we would live in if these radicals had their way: “Medical research would be materially impeded. There would be no more fishing fleets, cattle ranches, leather shoes, steak barbecues, animal parks, bomb-sniffing or Seeing Eye dogs, wool coats, fish farms, horseback riding, pet stores... Millions of people would be thrown out of work, our enjoyment of life would be substantially diminished. Our welfare and prosperity reduced.” Indeed, all domestication of animals would be taboo. There goes the family pet.

And there goes human uniqueness and dignity. All in the name of a fanatical ideology which will even resort to threats of murder to achieve its aims. This book carefully documents the ideology, the tactics and the fanaticism of this growing movement.