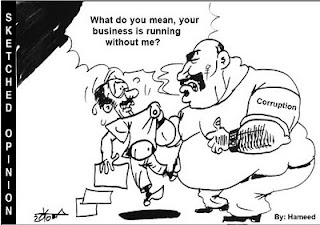 KABUL, Afghanistan — U.S. Attorney General Eric Holder was in the Afghan capital to talk with officials about improving the justice system and fighting corruption Wednesday, a day after Afghanistan's top prosecutor defended himself against allegations that he's being pressured not to pursue cases against powerful figures.

Corruption and an ineffectual court system have undermined public trust in President Hamid Karzai's government. The Obama administration and other donor nations, who need Karzai to be perceived as a credible partner, are pushing him to clean up bribery, graft and corruption.

In the Arabic language there are at least 10 words translated corruption, bribe or favoritism.

Rashwah - Corruption as defined by the penal code. A common slang word that has the same meaning as rashwah is barteel.

Wasta - Use of a common connection such as tribe or family to receive undue benefits.

Helwayneh - Used in Lebanon or Syria to mean sweets or treats for children. It is applied as not to demean or embarrass the one to whom it is offered.

For a fuller explanation of these terms, go here.
Posted by Alice C. Linsley at 7:13 AM