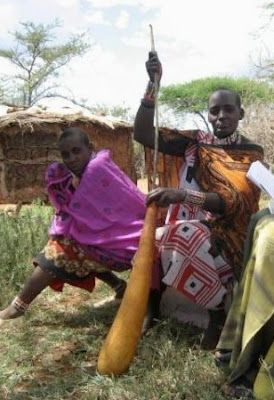 The nomadic Maasai people of Kenya are known for their limited diet of mostly milk and blood, which nutritionists expected would result in a poor health situation. The opposite proved true.

Kenyan scientists from the Jomo Kenyatta University and German researcher Nadja Knoll from the Jena University have analysed the diet a nomadic Maasai in Kenya's Kajiado District to look into the health impacts of the Maasais' legendary milk and blood diet. The results, published in Ms Knoll's recent thesis, proved a surprise.

"The surprising results of the field study show that the Maasai are in a good health status in spite of a limited diet," Ms Knoll concludes.

Blood tests showed that there is a high content of healthy omega-3 fatty acids in the Maasais' red blood cell walls, even though these acids are not ingested. "We were surprised by these results. They are proof for the enormous adaptability of the human organism," says Professor Gerhard Jahreis, under whose guidance the study was conducted.

Yet another finding was the outcome of the fieldwork in Kenya. Ms Knoll´s study shows that the traditional legends about the Maasai diet are wrong. Early European travellers in East Africa spread the image of the blood thirsty Maasai. According to their reports the herdsmen consume mainly meat, milk and blood. A particularly high percentage of fermented milk - a kind of yoghurt - was also said to be part of their diet.

Ms Knoll's findings however paint a very different picture. The Kenyan and German scientists discovered that the Maasai have strongly sweetened milk tea for breakfast. Some Maasai eat a kind of "porridge" in the morning, a liquid mixture of cornmeal, water, some milk and sugar, according to Ms Knoll.

For lunch there will be milk and "Ugali," a kind of polenta being made from cornmeal and water. "Dinner is similar to lunch," says Ms Knoll who points out that she did her field study at the end of the dry season.

There may be slightly different results in the remarkably shorter rainy season, because then the Maasai livestock produces more milk, accordidng to Ms Knoll. This milk will then ferment in calabashes. The outcome of the fermenting process will be a yoghurt-like drink that might have pro-biotic benefits.

"It is clear though that meat features only rarely on the Maasai menu," she emphasises. "The main part - more than 50 percent - consists of vegetarian food." The preferred meat is that of sheep and goats, whereas the meat of traditional Zebu cattle is only rarely eaten. "A cow will only be slaughtered for ritual festivities by the Maasai," adds Ms Knoll.

The eccentric diet of exclusively blood and milk of the Maasai therefore is a myth, the researcher team found.


Related reading:  The Maasai and Heart Disease by Chris Masterjohn
Posted by Alice C. Linsley at 7:30 AM