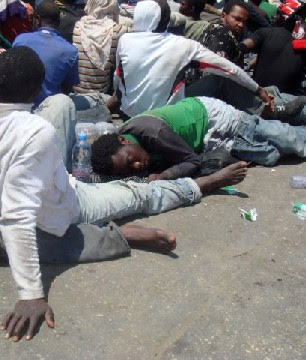 8 June - Libya, a hotspot for migrants crossing the Sahara to reach Europe, today ordered the UN refugee agency UNHCR to close its office and halt activities. No reasons were given for the decision.

UNHCR spokesperson Melissa Fleming told reporters in Geneva that the agency was hoping the closure would be temporary and that negotiations to find a solution were continuing. However, she indicated that until the matter was resolved there would be difficulties in meeting vital refugee needs.

"We regret this decision as we believe UNHCR has a great deal of work to do in Libya to protect, assist and find durable solutions for the refugees there," Ms Fleming said. "This will leave a huge vacuum for the thousands of refugees and asylum-seekers who are there already and, of course, those who continue to arrive steadily on boats every week."

Libyan authorities have stated no reasons for their decision to the UN agency and have made no statements to the press on the issue.

But UNHCR, whose mandate includes protecting, assisting and finding durable solutions for refugees and asylum-seekers reaching Libya, has been a bothersome agency for authorities. The agency, in direct contact with migrants, has often voiced concern over the hard-handed treatment of asylum-seekers in Libya, and over authorities' desire to forcedly return migrants before their case has been proven.

Ms Fleming however did not want to speculate in the reasons for Libya's sudden decision to through out the UN agency. She however noted that the issue of the closure had taken on added meaning today amid news that a sinking boat carrying more than 20 people, mostly Eritreans, had been intercepted in the last minute by Libyan vessels inside Malta's search-and-rescue zone.

The majority of the refugees are Palestinians, Iraqis, Sudanese, Somalis, Eritreans, Liberians and Ethiopians, the agency said. Most of the asylum-seekers came from Eritrea.

UNHCR runs the only asylum-seekers assistance programme in Libya and its departure would create a vacuum for the thousands of refugees and asylum-seekers already there, and those who continued to arrive every week, Ms Fleming said.

The UN refugee agency has worked in Libya since 1991 and currently has 26 staff members, the majority of them Libyan employees.