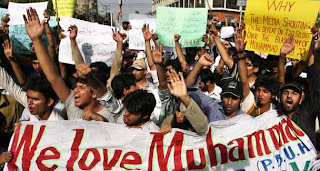 ISLAMABAD: Demonstrations were held across the country on Wednesday in protest against the social networking website, Facebook.

At a demonstration outside the Parliament House, protesters urged the government to raise the issue at the international level. They criticised the West for carrying out and encouraging blasphemous acts.

Addressing a press conference later, Talha Mehmood, chairman of the Senate standing committee on interior affairs, urged the government to redefine its relations with the West against the backdrop of an increase in incidents hurting religious sentiments of the Muslims. He appealed to the OIC to raise the issue at relevant forums.

The senator also condemned a decision of the French parliament to impose restrictions on wearing veil.