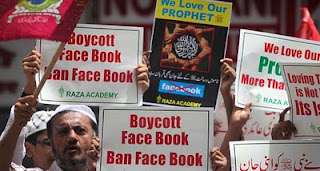 New Delhi:  Pakistan’s anger against religiously offensive web-based networking groups spread to India on Friday as Muslim protesters in Mumbai demanded a ban on the Facebook website. India has periodically banned websites, but mostly for their alleged links with terrorism.

United News of India said Muslims in the country’s financial hub protested against the Facebook website for hosting a competition of offensive caricatures.

In a protest meeting at Minara Masjid at Bhendi Bazaar and at Hindustani Masjid at Byculla in South Mumbai, various Muslim organisations demanded a permanent ban on Facebook and chanted slogans against the website’s operators.

The protest at Minara Masjid, conducted by Raza Academy, asked the government to take action against the organisers of the competition.

At the Hindustani Masjid, Islamic scholar Maulana Abdul Jabbar Kadri said: “We cannot tolerate such things which hurt the sentiments of millions of Muslims across the world.”

India is home to the world’s second largest Muslim population and it became the first country to ban The Satanic Verses, with Iran and Pakistan following its lead.

The ban on the book came after nationwide protests by Muslim groups who saw the book as insulting to their religion.