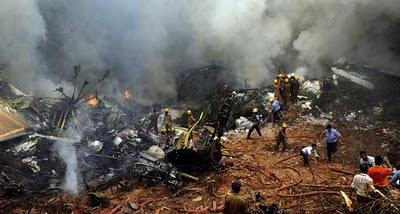 BANGALORE: Some of the seven survivors who crawled or were carried from the burning remains of a plane that crashed in India on Saturday told of their escape amid scenes of horror and death.

At least 159 people died after the plane overshot the runaway and plunged down a steep slope when coming in to land near the southern city of Mangalore on a flight from Dubai.

“The plane veered off toward some trees on the side and then the cabin filled with smoke,” Umer Farooq, his face covered in burn cream, told the NDTV news channel at a local hospital.

“The plane overshot the runway only to stop inside a forest area... it burst into flames,” he said. “I got caught in some cables but managed to scramble out.

“My hands, face and legs are all burnt. There was an announcement that the plane would land in 15 minutes. There was lot of smoke fire inside, there was no way to get out. I think the plane hit something.”

Another survivor, K.P. Manikutty, said he had managed to escape as the plane's fuselage smashed open.

“There was no warning to passengers about any trouble and it appeared a smooth landing,” Manikutty told the Press Trust of India.

“Immediately on touching the ground, the aircraft jerked and in a few moments hit something. Then it split in the middle and caught fire. I just jumped from the gap,” he said.

A police official said one of the survivors, a seven-year-old boy, later died from injuries.

“I thought the flight would come to a stop soon and prepared myself to get down,” Putturismail Abdulla, who works in the Gulf, told the UNI press agency.

“But there was a big burst sound. Soon I saw the aircraft breaking into two near me. Out of sheer desperation I jumped out and ran to safety.

“Looking back I saw the aircraft breaking down into pieces and caught fire. God saved my life. Despite injuries in the leg, I went to a nearby village and called my friend who picked me up and took me to a hospital.”

Television pictures showed rescue teams struggling down mud slopes to the the wreckage site, where many bodies remained inside the plane.

“One of my co-passengers fell into the fire while one escaped with me through the opening that was made after the plane broke into two,” Abdul Puthur, a shop manager in Dubai who was returning home after five months, said.

“It all happened within a few seconds. I found another person. Together we walked for about 20 minutes through the jungle before locals came and helped us.”

Families waiting at the airport for their relatives and friends wept uncontrollably as emergency workers rushed to the disaster scene.

“I can't believe I survived the crash,” said G.K. Pradeep reliving the moments before the tragedy.

“There were vibrations before the plane crashed... as soon as it hit the ground, I managed to get out and jump into a pit. There was smoke all over as the plane caught fire. After ten minutes, there was an explosion,” he said.