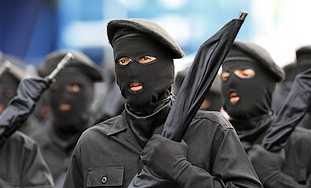 TEHERAN, Iran — A radical cleric called Saturday for the creation of a "Greater Iran" that would rule over the entire Middle East and Central Asia, in an event that he said would herald the coming of Islam's expected messiah.

Ayatollah Mohammad Bagher Kharrazi said the creation of what he termed an Islamic United States is a central aim of the political party he leads - called Hizbullah, or Party of God. He added that he hoped to make his vision a reality if the party won the next presidential election.

Kharrazi's comments revealed the thinking of a growing number of hard-liners in Iran, many of whom have become more radical during the postelection political crisis and the international standoff over the country's nuclear program. Kharrazi, however, is not highly influential in Iran's clerical hierarchy and his views do not represent those of the current government.

Kharrazi's comments were published Saturday in his newspaper, Hizbullah.

He said he envisioned a Greater Iran that would stretch from Afghanistan to Israel, bringing about the destruction of the Jewish state.

Email ThisBlogThis!Share to TwitterShare to FacebookShare to Pinterest
Labels: jihadism