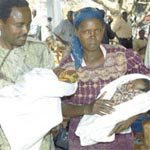 Nairobi: A family in Kenya is celebrating the birth of triplets but the plight of these boys has captured the image of the country’s media houses.

“A bundle of joy is often all the reason a family needs to celebrate. However, three call for something more elaborate,” said The Standard newspaper. The babies have been named after three top Government principals who came together to form the grand coalition government in Kenya after the country’s post-election violence.
In the homestead of Mr Simon Munyasya Kivelenge, 41, in Kyuso District are the triplets who have attracted visitors since their arrival in July and their naming after President Mwai Kibaki, Vice-President Kalonzo Musyoka and Prime Minister Raila Odinga.
Mr Kalonzo, Kenya’s Vice President visited the home last week and held the children named after him and his 2007 presidential campaign rivals. Mr Kalonzo, who contested for the presidency against his former allies President Kibaki and Premier Odinga in the December polls, was said to have offered the family financial and material assistance promising to give more.
“This was a relief for Munyasia, who had sent out a plea for assistance saying his poor family was constrained by the arrival of the threesome,” said commentators.
Mr Munyasya, the father of the babies, admitted to the press that although his wife Ms Beatrice Muthakye, 34, safely delivered the three boys, he was not prepared for their arrival."I expected my wife to bring forth one child as she had done in seven previous births," he added when Vice President Musyoka visited him. "I was shocked and surprised when my wife gave birth to three babies!"
The couple has six other children, the seventh having been stillborn. The Vice President was amused as he in turns held little Kalonzo, Raila and Kibaki. The Vice-President, a born-again Christian said: "This is God’s blessing and I am honoured to be here to help them take care of these little ones."
Read it all here.
Posted by Alice C. Linsley at 8:20 AM