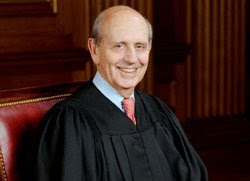 A Fordham University legal ethics center’s decision to award an ethics prize to the pro-abortion rights Supreme Court Justice Stephen G. Breyer is drawing criticism for apparently ignoring the justice’s participation in a Supreme Court decision that struck down laws restricting the practice of partial-birth abortion.

Fordham University’s Stein Center for Law and Ethics recently announced Justice Breyer’s selection as the 2008 winner of the Fordham-Stein Ethics Prize. According to the prize’s charter, it recognizes an individual who "exemplifies outstanding standards of professional conduct, promotes the advancement of justice, and brings credit to the profession by emphasizing in the public mind the contributions of lawyers to our society and to our democratic system of government."

"Justice Breyer has devoted his life to the public good,” he said in a press release. “He was a brilliant, influential, and path-breaking scholar. His government service before taking the bench was of the highest quality. As a jurist, his opinions have been marked by thoughtfulness, balance, rigor, and a commitment to justice and liberty. He has been an eloquent and forceful champion of judicial integrity, as we saw this spring when he participated in a forum on judicial independence at Fordham Law together with Justice Sandra Day O'Connor. In every facet of his extraordinary career, he has embodied the great ideals of the Fordham-Stein Prize, and he is a superb honoree."

"In every phase of his professional life, as a lawyer in government service, as a scholar, as a judge and justice, Stephen Breyer has exemplified the values that the Fordham-Stein Prize honors,” he said.

"Justice Breyer is clearly an attorney whose career has been unwaveringly committed both to excellence and to upholding the integrity of the profession."

Justice Breyer wrote the majority opinion in the 2000 Supreme Court decision Stenberg v. Carhart, which struck down state laws against partial-birth abortion. In his opinion, Breyer wrote: “this Court, in the course of a generation, has determined and then redetermined that the Constitution offers basic protection to the woman’s right to choose.”

Breyer’s colleague Justice Antonin Scalia, writing a dissent in the case, compared the injustice of the majority decision to both the Dred Scott v. Sandford decision which provoked the U.S. Civil War and the Korematsu v. United States which permitted the internment of Japanese citizens during World War II.

“The method of killing a human child . . . proscribed by this statute is so horrible that the most clinical description of it evokes a shudder of revulsion,” Scalia wrote.

Cardinal Newman Society President Patrick J. Reilly criticized the Jesuit-run university, saying in a statement that the awarding of the prize “amounts to nothing less than Fordham University thumbing its nose at the US Bishops, whose opposition to such honors is clear.”