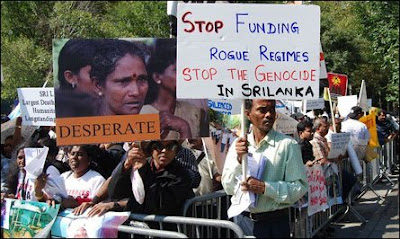 Tamils protested Wednesday, Sept. 24, in front of the United Nations Headquarters in New York to draw attention of the United Nations, demanding sanctions against Sri Lanka, and advocating to invoke the principle of Responsibility to Protect (R2P) as a means to halt what the protesters alleged "genocide of Tamils." The protesters also denounced the visit to the UN by the Sri Lankan President Mahinda Rajapaksa.

About 20 Sri Lankan Government supporters, including Buddhist monks, showed up briefly for a counter protest.
Weeks before his visit to the UN the Rajapaksa government expelled all NGOs including the UN from the areas of conflict. Food and medicine to the trapped Tamil population was blocked while the Government armed forces emboldened by Iranian and Chinese funding were engaged in indiscriminate aerial bombings and artillery shelling of heavily populated Tamil enclaves, killing innocent civilians and displacing over 200,000.
The protesters chanted "Rajapaksa, don't come to the UN, go to The Hague." Speaking at the rally, Dr. Ellyn Shander, a US physician who volunteered in Sri Lanka after the Asian Tsunami, drew parallels to the Nazi holocaust with the plight of the Tamils in Sri Lanka and accused the Sri Lankan government of committing genocide against Tamils.
Read it all here.
Posted by Alice C. Linsley at 8:50 PM