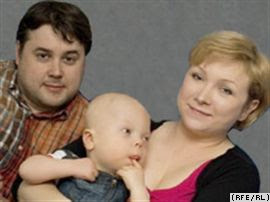 Two Russian mothers have won the right to rebut a journalist's argument that handicapped children should be euthanased. Aleksandr Nikonov, of the popular tabloid Speed-Info, wrote a column contending that children with mental retardation and other developmental disabilities should be killed so that they don't suffer, in what he termed "post-natal abortion".

The two women say that many Russians share his ideas. "The opinion expressed by the author is not unique; statistics show that one-fourth of Russians share similar views," Shtarkova told the journalists' union on February 2. "Complete strangers come up to me in the street and tell me that I'm depraved and deserve my fate. Doctors and social workers refuse to do their jobs, just because my child is severely disabled."

Mr Nikonov was unrepentant. He told the Radio Liberty "If you want to bring up a child with Down syndrome, you can do it. But if you don't, you can euthanase him. Why is prenatal abortion legal, and postnatal abortion is not?"

This incident underscores Russia's reluctance to care for its citizens with disabilities who are widely regarded as burdens for society, says Radio Liberty.

"The issue is gaining traction as Russia faces a severe population crisis brought on by a low birthrate and poor pediatric health. Over the next two decades, Russia's population is expected to shrink by 17 million people. Faced with such statistics, advocates of people with disabilities say the country cannot afford to let prejudice stand in the way of caring for the country's estimated 15 million registered "invalids" -- adults and children suffering from a range of physical and mental ailments." ~ Radio Liberty, Feb 8
Posted by Alice C. Linsley at 7:00 PM