Heavy Snow Here and There

The Eastern US has been slammed with heavy snow and plunging temps, and so has Pakistan, with some northern regions receiving between 13 and 18 feet of snow. Here's the report: 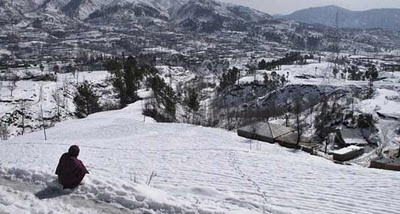 PESHAWAR: A record snowfall in upper parts and heavy downpour accompanied by hailstorm in the plains, paralysed life in the Frontier province on Monday.
Upper and Lower Dir, Swat, Shangla and the Bajaur tribal region witnessed a record snowfall after decades, triggering a punishing cold wave as mercury plunged to below zero degree Celsius.

Incessant and heavy snowfall over the last 24 hours in Upper Dir broke an 18-year record as the town received 2.6 feet of snow. Mountainous areas received around six feet of snow, bringing life to a standstill.

The district administration has ordered closure of all schools for a week and postponed a polio drive in the district.

The snowfall began on Sunday and continued the whole day on Monday in and around Dir town, dumping up to two-and-a-half feet of snow. Thal, Doog Darra, Kalkot, Barikot, Qulandi, Lowari, Barawal and Dobando received up to six feet of snow.

Dir received rains and heavy snowfall after a long dry spell. All upper parts of the district have been cut off from the rest of the country. Roads to Qulandi, Dobando, Barawal, Girgat, Sharingal, Thal, Kalkot and other areas have been closed for all kinds of traffic. The bad weather also played havoc with electricity, leaving several areas without electricity. The Dir-Peshawar road was blocked for all kind of traffic. Attendance at government offices remained very thin.

Locals said the snowfall began at 6am and continued till late night. One foot of snow was recorded at Timergara headquarters and other plain areas.

They said it was the heaviest snowfall after 1962, forcing over 800,000 people of the district to remain indoors.

According to reports, 13 feet of snow was recorded in Kalam, 15 to 18 feet in Atrorh, Gabral, and Osho, three feet in Bahrain and 10 to 12 feet in Malam Jabba, Miandam and Murghzar.

There were also reports of damage to houses and buildings. The Silk Mills building on Bamakhela road was destroyed.

Heavy snowfall was also recorded in Shangla district. One foot of snow was recorded in Alpuri, four feet at Shangla top and six feet on Wengo top.

In Bajuar, people said such a heavy snowfall was recorded after 20 years. The snowfall began at 11am and continued till 3pm.

In Swabi, hailstones and torrential rain lashed different parts of the district at night and early in the morning, causing suspension of power supply and damage to standing crops.

Over the last two weeks, it was the second time that hailstones pounded different regions of the district.