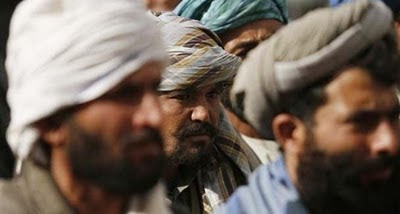 WASHINGTON: The United States and its allies are expected to set up a $500 million integration fund at a conference in London this week to lure Taliban fighters to join the political mainstream.

“We are going to go to London to affirm our international support for it,” said US special envoy Richard Holbrooke. “Money will be forthcoming for it. I can’t say how much. The Japanese are going to take the lead.”

In an interview to MSNBC television on Monday evening, Mr Holbrooke said that the initiative would fill a gap in dealing with the Taliban because “there’s no good programme to invite them back into the fold”.

British Prime Minister Gordon Brown, who is hosting the London conference, said the summit would “cover both our military and our political strategies, but concentrate on the political strategy for Afghanistan”.

About 60 countries are expected to attend the conference. The United States is offering $100 million to set up the fund.

In Berlin, German Chancellor Angela Merkel told journalists that her government would contribute $14 million a year for five years to the proposed fund.

“This is an international accord to set up a fund to allow reintegration in cooperation with the Afghan government,” she said.

She said 500 German troops would join 4,300 already in place and that 350 reservists would be put on stand-by for Afghanistan.

The plan will be presented at the conference on Jan 28, in a response to a call by Afghan President Hamid Karzai for help in getting insurgents to stop fighting his government.

The plan aims to integrate those Taliban who are not part of the Al Qaeda terrorist network into the political mainstream.

In an interview to Turkey’s NTV, President Karzai praised the plan as a step in the right direction, saying that “those who joined the Taliban are also children of Afghanistan”.

“I will be making a statement at the conference in London to the effect of removing Taliban names from the United Nations sanctions list,” Mr Karzai said.

In Washington, the US State Department announced that Secretary of State Hillary Clinton would also attend the conference, which would demonstrate the international community’s support for Afghanistan’s future and the agenda outlined by President Karzai in his November 19 inauguration speech.

“The meetings will focus on the implementation of our strategy in support of Afghanistan’s security, governance and development, and improved international civilian coordination,” the State Department said.

Gen Stanley McChrystal, the top US commander in Afghanistan, will also attend the conference. “I’d like everybody to walk out of London with a renewed commitment,” he said, “and that commitment is to the right outcome for the Afghan people”.

Gen McChrystal is expected to push his plan for peace with the Taliban, while Mr Holbrooke will participate in discussions on the so-called Taliban integration fund.

Canada, which has deployed 2,800 troops in Afghanistan, also has indicated its support for a negotiated peace with the Taliban.

“Yes, discussions with the Taliban; yes, led by the Afghans; and yes, certain conditions that have to be in place,” said Canadian Defence Minister Peter MacKay. “Without that the discussions really are moot.”

The Taliban has long resisted calls for negotiations. Last week, spokesperson Zabihullah Mujahid emphatically stated that “the only political solution is that the foreign forces and the Afghan government surrender to us”.

Diplomatic observers in Washington say that negotiations may be the only way to a peaceful settlement in Afghanistan.

A continued confrontation, they warned, might lead to a massive bloodshed at the hands of militants once Nato soldiers left.