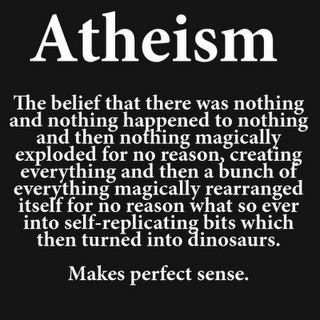 Richard Dawkins has started up a charity called “Non Believers Giving Aid” so atheists can give to relief efforts in Haiti in a way which promulgates their atheism. Because as I’m sure you know when Haitians receive relief they’re very interested in whether it came from a believer or a non-believer.

I always get a kick out of evangelizing atheists and how they’re so desperate to prove that they’re as good (and usually better) than us religious types. Dawkins writes on the charity’s website: “When donating via Non-Believers Giving Aid, you are helping to counter the scandalous myth that only the religious care about their fellow-humans.” While we should all applaud Mr. Dawkins’ altruistic efforts to help his fellow man I’m just not sure he’s making the point he thinks he’s making.

If Dawkins is running this charity to show up religion and helping Haitians is only a secondary consequence then we could hardly claim that what he’s doing is good by most definitions. Because if that’s true then it would seem that the greatest value of Haitians lives to Dawkins is how they make Dawkins look.

But let’s give Dawkins the benefit of the doubt because us religious types like to do that. If he’s helping people because he wants to help people then I almost hate to tell him that he’s kind of supporting some of our arguments. While Dawkins argues that he can be good without God, I think he’s actually only proving that Richard Dawkins can be good while not acknowledging God.

I have to wonder from what philosophical grounding does Dawkins’ altruism emanate? Why is other human life worth anything if there is no God? From what philosophical groundwork is he basing his good works on? Dawkins, it would seem to me, hasn’t defined his terms and is only borrowing our definition of “good.” Because without our definitions he’d have to ask the question, “What is good without God?” And that’s something I haven’t seen answered yet.

In fact, I think Dawkin’s efforts to do good is one of the best arguments for innate knowledge of right and wrong.

I almost hate to inform Mr. Dawkins that his little plot is actually helpful to believers as we believe that no matter what you espouse verbally each man has written on his soul the ability to tell right from wrong. And while Dawkins denies it, his actions indicate otherwise. There is a moral sense which you can ignore but your choosing to ignore or embrace it has no effect on its existence, much like God Himself.

But we’re glad for the help anyway. Thanks.

Email ThisBlogThis!Share to TwitterShare to FacebookShare to Pinterest
Labels: atheism