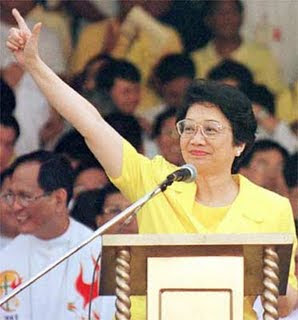 Here is a story that many have never heard:

"Then Sr. Lucia did something the Cardinal did not expect. She took out a rosary which (she said) she herself made, bead by bead. She wanted Cardinal Sin to give it as her personal gift to Mrs. Aquino, and she said--somewhat surprisingly--"Tell her to take good care of it." It was a promise of Our Lady's blessing on President Cory during her presidency and beyond.

Let me now cite Mrs. Aquino herself: "Sister Lucia sent me this rosary which she herself made, with the message that I would be supported and protected in my presidency. She added, however, that more suffering would come my way. I now know that it was a prophetic message, as I had to fight back seven coup attempts to save my administration from power-grabbers in uniform. With Our Lady's protection, I stood my ground and never left Malacañang, even when it was being attacked."

We know that President Cory saw the seven coup attempts through, and finished her term, handing over the post to her duly elected successor, General Fidel Ramos, in 1992. The six years of her governance she constantly entrusted to the protection of Our Lady of Fatima, to Our Lady's Immaculate Heart."

Read the full story here.
Posted by Alice C. Linsley at 5:20 AM