Coptic Twins Forced to Be Muslim 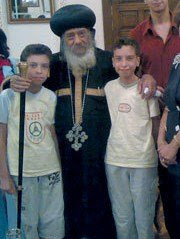 Cairo (AINA) - Reported by Mary Abdelmassih-- The Egyptian Court of Cassation ruled on Monday, June 15, 2009, in favor of Mrs. Camilia Lutfi, giving her the right to retain custody of her twin boys Andrew and Mario, in spite of their father's conversion to Islam, thereby ending the 5-year legal battle over the custodial rights between her and her ex-husband, Medhat Ramsis.

Ms. Lutfi summed up her fight for her children's custody by saying: "My opponent is not only my divorcee; my opponent is everyone who hears this story and wants Andrew and Mario to become Muslims."

The Coptic twin boys resisted their enforced Islamization by using one sentence 'I am a Christian.' This has made them heroes in the eyes of Copts and a role model for Coptic children in similar situations.

The Court of Cassation accepted the appeal filed by the Public Prosecutor against the final ruling of the Alexandria Appellate Court of September 24, 2008, to transfer the custody of the twin boys to their father, who had converted to Islam in 2000 and changed his children's religion on their official documents in 2006. The Alexandria court had based its ruling on an interpretation of the principles of Islamic law (Shari'a), contrary to constitutional law on maternal custody and the rights of the child.

In its Monday ruling, the Court of Cassation refused the Public Prosecutor's argument that the Alexandria Court should have given the twin boys the choice to remain Christian or to convert voluntarily to Islam, since they have reached the age of seven, considered as the age of 'discrimination between religions in Shari'a. The Court insisted on upholding its previous rulings that conversion by one parent must be followed by a change in the children's religion to Islam, which is considered as the 'best of religions', until they reach the age of 15 years.

Ms. Lutfi commented on the ruling: "Thank God, we received an unprecedented verdict to retain custody of the children; however, the judge deprived the children of their right to choose their own religion."

Human rights organizations heavily criticized this latest ruling upon reading its details, and believe that one hand gave and another took away. Hossam Bahgat, Director of the Egyptian Initiative for Personal Rights (EIPR) said that it was a small step forward, and a great opportunity missed.'

"The Court of Cassation wasted an unprecedented opportunity to stop the discriminatory policy, which currently forces a change of religion to Christian children in official documents when the father converts to Islam." he said. "We regret that it only addressed the outcome and declined to support the initiative of the Public Prosecutor, who sought to address the root of the problem, which is the non-voluntary change of the children's religion without paying the slightest regard to their will or the will of their mother."

Activist Medhat Kelada, spokesman for the European Union of Coptic organizations for Human Rights (EUCHR) told Elyom el Sabeh newspaper that this ruling represents a minor achievement, but is against equal citizenship, and has shown the devotion of the Court of Cassation to the religious State. "The ruling states that since the father converted to Islam, the children automatically follow the 'better religion', which is of course, Islam. We should not applaud a flawed ruling."

The rule of the Court of Cassation, newly emphasized the right of the mother of the "People of the Book" (Christians and Jews) to the custody of her Christian child who was converted to Islam due to the conversion of his father in what is called 'Islamization by dependence' until they reach the age of 15 years, the age of discrimination and choice. Muslim practice over the past 15 centuries has been to take children away from their Christian mothers as soon as their father converts to Islam, even if they are very young, as well as converting them to Islam by dependence.

Although this ruling was seen by some as a victory in custodial matters, others believe that Christian children are still forced into Islam. Activists see a loophole through the presence of the clause which allows for the denial of custody to a mother "when there is fear over the religious status of the youngster from their mother's upbringing." They believe this will open new legal arguments in the family courts and the possible use of this clause against Christian mothers.
Andrew and Mario's case found national and international support, especially from human rights organizations. The EIPR together with the London-based INTERIGHTS filed a complaint in 2008 to the African Union's main human rights body against the Egyptian Government, accusing it of human rights violations against Mario, Andrew and their mother. The United Kingdom, member at the European Parliament, Dr. Charles Tannock, submitted their case to the EU Commission in October 2008.

Andrew and Mario's story caught the attention of the media when, obliged to sit for the Islamic religion test at school in May 2007 -- students have to pass Religion exams to be promoted to a higher class -- the boys answered none of the questions. On his answer sheet Andrew wrote "I am Christian" and Mario wrote: "My religion is Christianity." They failed the exam and had to re-take it, but again insisted on writing these single phrases. On national television they declared: "We do not want to be Muslims. We are born Christians, will remain and die as Christian."

EIPR emphasized that the ruling shows the need for the government to remedy this issue in the amendments to the Personal Status Law, which the Justice Ministry intends to submit to Parliament at its next session, taking into consideration the legal view of the Public Prosecutor of giving children the right to chose their religion upon reaching the age of seven years, especially after including an article in the 2008 Child's Law which provides for the protection of the child against religious discrimination.

"I feel very sorry for the 5 years stolen from their childhood, spent in courtrooms, threats to escape or go on hunger strike if forced to go to their Muslim father, not to mention the psychological harm of evading the police arriving to implement the 2008 final court ruling to deliver them to their father," Lutfi said.

Ms. Lutfi confirmed to El-Yom El-Sabeh newspapers, that she intends to file a case in front of the Supreme Administrative Court to establish the right of her twins sons, who were born on 6/24/1994, in choosing their religion upon reaching the age of 15. "The judge's insistence on stating that children follow their Muslim father's religion will cause problems to the children's education, as was the case in the past," Lutfi added.

Another massive hurdle awaits Andrew and Mario at the age of 16, when they apply for their identification cards. Their father already changed their religion on their official documents, and since the Ministry of Interior constantly refuses to alter this data, they are only left with the option of going to court to force this change. There are presently hundreds of similar cases pending in front of the courts, leaving the lives of the so-called Christian 'Returnees' in limbo. It is worth noting that there has never been one single registered case in Egyptian history where the government allowed a change in the official status of children of Muslim converts.