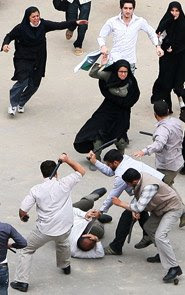 Mahmoud Ahmadinejad brought tens of thousands of supporters into the heart of Tehran tonight in a bid to take back the capital after a weekend of vicious running battles between state security forces and large crowds of Iranians who insist that Mr Ahmadinejad stole last Friday’s presidential election.

Chanting ’Allah o’Akbar” (God is great) and “Ahmadi we love you”, the army of zealous hardliners poured into the central square in a massive show of strength designed to intimidate the furious supporters of Mr Ahmadinejad’s relatively moderate opponent, Mir Hossein Mousavi.

They came from far beyond Tehran. “The protestors are lying. There was no cheating,” declared Farang Kamalwand, 39, a chador-clad woman who had travelled 700 kilometres by bus from Lorestan. “We came to prove to people outside this country that we love and support our president,” said Karamollah Rahimi, a builder who had journeyed nine hours from Lordegan.

Mr Mousavi, 67, a former prime minister, has been in hiding since Friday night, but has issued a stream of internet statements urging his supporters to continue their nationwide protests against an election he called a “charade”: some results were announced before the ballot boxes had even been opened. Tonight, he appealed to the Guardian Council, a powerful body of senior clerics, to declare the election void.

Britain, the United States and other western governments expressed serious concern. Several leading reformists have been arrested including, briefly, the brother of Mohammed Khatami, the former president.