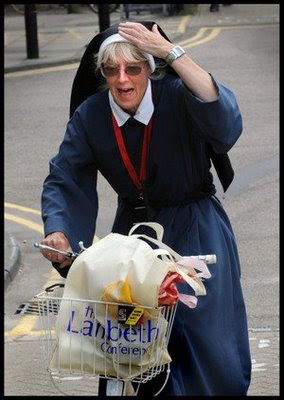 Ruth Gledhill of The Times Online is calling Lambeth a “circus”. This circus is performing behind 10-foot high security fences with guards posted. Inside the grounds is a blue circus tent.

The Archbishop of Canterbury, Rowan Williams, spoke on the opening night, calling for the bishops and their spouses to focus on relationships to Christ and to one another. He asked those attending to find a way to trust God and one another and warned them not to expect to solve the Communion’s many problems in the 3 weeks they will be gathered in Kent.

Sister Pamela (shown above), assistant superior of the Community of All Hallows in Suffolk, rides her bicycle at Lambeth.

Meanwhile, Gene Robinson, the gay Episcopal bishop who “married” his partner in June, is blogging about his experiences as one not invited to Lambeth. His blog is called Canterbury Tales from the Fringe. He reports that his sermon at St. Mary's Putney was interrupted by a young man who called him a heretic. He also claims that he stayed inside the church to eat rather than face "danger" outside. Robinson told Paul Majendie: “I take the threats very seriously, I have to,” he said. “But I am not interested in being a martyr, I just want to be a bishop.” 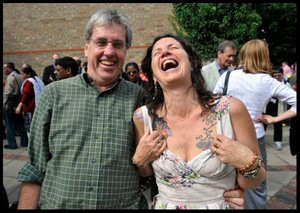 John McIntyre, the Bishop of Gippsland (Western Australia) and his tattooed wife smile and show off for the camera (shown right).

Rumors abound as Anglicans address their various disagreements over teaching authority, catholicity, human sexuality and Anglican identity. The London Times is calling this the "Summer of Schism."

Jim Naughton, communications officer for the liberal Episcopal diocese of Washington, D.C., has said: “Whether there will actually be schism is an open question, but at least one factor mitigates against it: as soon as schism is declared, the media will loose interest in the Anglican Churches of Nigeria and Uganda, and their small, but influential group of followers in the United States."

"In my view, the split has already taken place," said David Steinmetz, a professor of Church history at Duke Divinity School in Charlotte, North Carolina. "The interesting question — still unanswered — is how wide and deep will it grow?"

About one-quarter of the Anglican bishops have declined invitations to Lambeth because they are not in communion with the leaders of the Episcopal Church USA and the Anglican Church of Canada, entities that ordain non-celibate homosexuals and perform same-sex ceremonies. Most of these bishops attended the Global Anglican Future Conference in Jerusalem in June. The BBC will broadcast a documentary on the GAFCON Pilgrimage and Conference on July 21st, 2008.

The first edition of the Lambeth Reader, intended for delegates only, warns that bishops who transgress diocesan and provincial boundaries, even to render assistance to Anglicans persecuted by unfriendly bishops, are guilty of undermining collegiality. The warning is clearly directed at Archbishops Peter Akinola (Nigeria), Immanuel Kolini (Rwanda), Henry Orombi (Uganda) and Gregory Venables (Southern Cone which includes Anglicans in Argentina, Bolivia, Chile, Paraguay, Peru and Uruguay).

Benedict XVI has sent Cardinals Kasper, Dias, Murphy-O’Connor to the Lambeth Conference, offering support to the beleaguered Rowan Williams. The Vatican reports that the Pope “does not support the defection of conservative Anglicans to the Roman Catholic Church”, yet John J Myers, Archbishop of Newark and Ecclesiastical Delegate for the Pastoral Provision, reports that efforts are being made to expand the mandate of the Pastoral Provision of Catholic parishes using Anglican-inspired services to include the clergy and faithful of continuing Anglican communities. He said, "We are striving to increase awareness of our apostolate to Anglican Christians who desire to be reconciled with the Holy See. We have experienced the wonder of several Episcopal bishops entering into full communion with the Catholic Church and we continue to receive requests from priests and laity about the Pastoral Provision."

Email ThisBlogThis!Share to TwitterShare to FacebookShare to Pinterest
Labels: Anglicanism