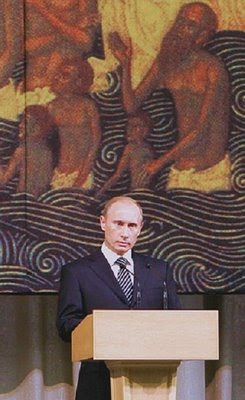 On 28 June, after a molieben in the Assumption Cathedral in the Moscow Kremlin, the solemn formal opening of the 1,020th anniversary of the Baptism of Russia took place in the State Kremlin Palace. The participants in the Archpastoral Council, whose sessions were closed the day before, were present at the affair. In addition, political and public figures, representatives of other Christian confessions and non-Christian faiths, the leading Orthodox clergy of Moscow, and influential laymen of the capital were in attendance.

Prime Minister Vladimir Putin gave one of the keynote addresses at the festivities. “From this time forward, the state intends to support the programmes of the church directed towards secular and interreligious harmony, its social work, its efforts in the support and preservation of our cultural heritage, and its charitable mission”.
In his speech, His Holiness Patriarch Aleksei noted that it was important to preserve the church unity that our ancestors passed on to us. “Together, we are invincible. Our community, mutual aid, and fraternal solidarity shall ensure our joint future”, he emphasised.
On 29 June, the date of the formal closing of the MP Archpastoral Council, Patriarch Aleksei celebrated Divine Liturgy in the Cathedral of Christ the Saviour assisted by the assembled hierarchs of the Church. Metropolitan Philaret of Minsk and Slutsk, the Patriarchal Exarch of all Byelorussia, gave the message of the Archpastoral Council to all clergy, to sincere followers of other faiths, and to faithful Orthodox Christians. President Dmitri Medvedev and his wife arrived after the liturgy, when a brief molieben was served. President Medvedev said a few words on the occasion of the closing of the Council and the celebration of the 1,020th anniversary of the Baptism of Russia. He noted that the Church is gradually retrieving everything that rightfully belongs to it, in particular, holy relics and icons. Then, the president formally handed over the title to holy objects that had been held in the collections of the Kremlin museums during the time of Soviet rule.
Read it all here.

Email ThisBlogThis!Share to TwitterShare to FacebookShare to Pinterest
Labels: church and state, Russia