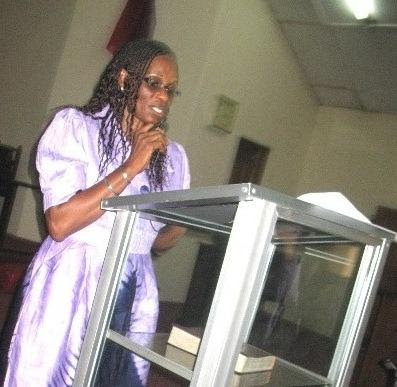 Mrs. Kehinde Ajoni, Executive Secretary of National Human Right Commission in Nigeria, called on women not to allow their basic human rights to be trampled and urged the Church to responsibly confront all forms of societal injustice.

Ajoni, a lawyer by background, told the gathering of Anglican Bishops’ wives in Abuja that human rights are God-given entitlements from the beginning of creation and as such, should not be seen as being foreign to any culture.

In buttressing her point, Barrister Ajoni traced the history of creation, maintaining that God gave Adam and Eve fair hearing even at Man's fall.

“Whereas God created the earth and every other living thing by proclamation (Gen. 1:1-25), He called a Conference of the Heavenlies before He created the human being (Gen.1:26). He breathed into man’s nostrils the breath of life and man became a living soul (Gen. 2:7).

“It took God extra efforts to put human being in charge of the entire creation. He also conferred on humankind certain privileges over other creatures. If God abhors arbitrary, rash and off-handed actions in His system, it behoves the Church to follow these tenets without question.

She regretted that in spite of these constitutional rights many Nigerians, especially women and children, still suffer from human rights violation and misery. She argued that women are subjected to domestic violence, brutality and social injustice under the guise of tradition.

Mrs Ajoni blamed the Church for not living up to her responsibility to report to authorities inhuman treatment of vulnerable women, particularly widows. She pointed out that it is expected of the Church to provide certain measures of protection and support for this group of women as enshrined in the Scripture. And according to her, this includes training, engaging and empowering them in different crafts and petty projects that are not capital intensive.

She charged the Bishops’ wives to oppose all forms of violations and deprivations by playing complementing their spouses' roles, especially their mediatory functions on matters relating to human rights infractions against their parishioners. She also told the women to be cautious about acquiring material assets.

Source: Church of Nigeria News
Posted by Alice C. Linsley at 10:47 AM