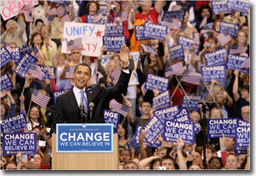 Barack Obama, the presumptive pro-abortion nominee of the Democratic Party, has plans to reward the allies that helped him topple Hillary Clinton from her throne by making total unrestricted abortion in the United States his number one priority as president.

In light of Obama's recently achieved status as the presumptive Democratic presidential nominee, Focus on the Family's CitizenLink has decided to remind its supporters that almost one year has passed since Obama made his vows to the Planned Parenthood Action Fund that abortion would be the first priority of his administration.

"The first thing I'd do as president is sign the Freedom of Choice Act," Obama said in his July speech to abortion advocates worried about the increase of pro-life legislation at the state level.
The Freedom of Choice Act (FOCA) is legislation Obama has co-sponsored along with 18 other senators that would annihilate every single state law limiting or regulating abortion, including the federal ban on partial birth abortion.

Obama made his remarks in a question-and-answer session after delivering a speech crystallizing for abortion advocates his deep-seated abortion philosophy and his belief that federal legislation will break pro-life resistance and end the national debate on abortion. (see transcript: http://lauraetch.googlepages.com/barackobamabeforeplannedparenthoodaction)

To read some of Obama's Famous Quotes go here.
Posted by Alice C. Linsley at 10:41 AM

Email ThisBlogThis!Share to TwitterShare to FacebookShare to Pinterest
Labels: abortion