The Moral Code of Ani

The Code of Ani is a negatively worded moral code, like the Ten Commandments. It dates to c. 2500 B.C. It has 42 confessions and appears to have a chiastic structure.

The text is Akkadian and the authority of the code is derived from the Father God Anu/Anum, whose divine son was called Enki, meaning "Lord over the Earth." Among the Nilotic peoples, God Father was called Ra and God son was called Horus. 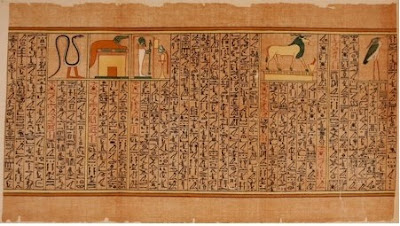 It appears that the moral codes found in Numbers, Deuteronomy, and Leviticus derive from an earlier tradition. The Code of Ani shows evidence of influence from the Law of Tehut which dates to c.3200 BC. Parallels can be found to later Nilotic writings, such as Utterance 125 in the Egyptian Book of the Dead (c.1500 BC) which speaks of the heart of the dead king being weighed.


The word Ani is related to the Akkadian word anaku - the royal First Person. It is related also to the Anu priests who served at the most prestigious shrines throughout the ancient world. This image shows a tera (priest) of Seth in service to the God of Seth at a HT temple of the Anu people. 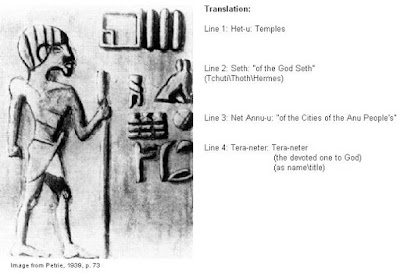 The temples of the ancient world were located on mounds which is why they are often labeled as "high places." The Horite mounds and the Sethite mounds were sacred Hebrew shrines. Though separate, they shared common religious practices and beliefs.

PT Utterance 470 contrasts the Horite mounds with the mounds of Seth, designating the Horite Mounds "the High Mounds."

The AN root appears in variants such as Anoch/Enoch; Anakim; Ana; Annas; Ananus; Ananias and Hannah. The three Anakim clans were named for the three highest ranked sons of Anak whose names were Sheshai (Shasu), Ahiman, and Talmai (Josh.15:14).

The Shasu are mentioned in ancient texts as the "Shasu of YHWH." Two hieroglyphic references dating to the New Kingdom (1550-1069 BC) refer to “the land of the Shasu of YHWH” in reference to ancient Edom. These inscriptions are found on the Nubian temples of Soleb and Amara West, and are the oldest references to YHWH outside the Bible.

Many priests are named for the High God Anu/Ani. The High Priest Ananus was appointed by Herod the Great. Ananus served as the High Priest of Edom/Idumea from 6-15 AD. Edom was home of some of the greatest Horite Hebrew rulers, and all of Abraham's territory was in the region of Edom. Edom was known as one of the ancient seats of wisdom.

The moral Code of Ani (below) represents ancient wisdom which would have been used to instruct sons, as in Proverbs.

Related reading: Ancient Moral Codes; Edom and the Horites; The Nubian Context of YHWH; Menes the Law Giver; The Laws of Ur-Nammu,