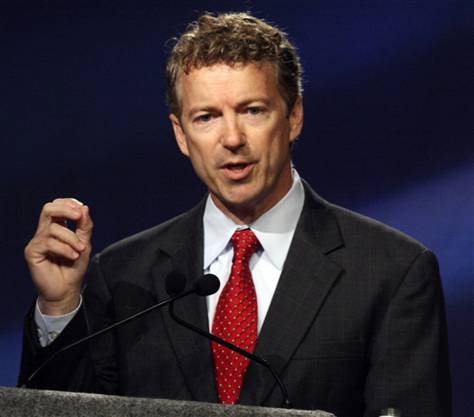 “I will speak until I can no longer speak,” Paul said. “I will speak as long as it takes, until the alarm is sounded from coast to coast that our Constitution is important, that your rights to trial by jury are precious, that no American should be killed by a drone on American soil without first being charged with a crime, without first being found to be guilty by a court.”

The Kentucky senator was allowed to yield to the other like-minded conservatives for “a question,” but there are no rules mandating the form of the question. So, for example, Cruz and Lee delivered long speeches themselves in opposition to the drone program, sometimes actually stopping to ask Paul a question, other times going on for extended speechifying.


Related reading: How Hilter Conquered Austria; From Rule of Law to Law By Decree; Obama's Drone Strike Legacy; We the People, Sovereign Under God; Lawlessness at the Highest Levels of Government

Hooray--Stand with Rand!!! He's into hour eight as I type this...like "Mr. Smith Goes to Washington."
His 10 Best Lines (so far): http://www.businessinsider.com/rand-paul-filibuster-2013-3#ixzz2Mns1O41L

Thanks, John. We are partial to our Kentucky hero.