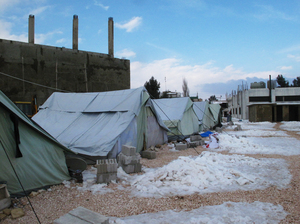 11 January 2013 – The United Nations refugee agency today said today it is implementing measures to help more than 600,000 displaced Syrians weather harsh winter conditions, while warning that the number of people fleeing the violence in the Middle Eastern country continues to grow.

"The severe winter conditions across Syria and the surrounding region this past week have brought new difficulties for refugees and other displaced people," a spokesperson for the Office of the UN High Commissioner for Refugees (UNHCR), Adrian Edwards, told reporters in Geneva.

He added, "Even with the winter preparation work that has been done in recent months, many refugees in both camp and non-camp situations are facing particularly cold and damp conditions."

There are currently 612,134 people registered or awaiting registration as refugees in Syria's neighbouring countries, and Mr. Edwards said the numbers have not slowed down in recent weeks.

In northern Jordan, the Za'atri camp flooded last week as a result of some of the worst weather conditions the country has seen in the past 20 years. UNHCR delivered several truckloads of gravel to elevate the ground level and improve drain-off. Work was also done to release water into the creeks surrounding the camp, and Mr. Edwards said the whole site should be dry soon.

"Health services in Za'atri camp are all operational with mobile clinics covering the affected area in the camp, detecting medical cases in need of transfers to the camp hospital and treating primary health care patients on the spot," he said, adding that they are also assisting newly-arrived people who faced a hazardous journey.

"Many of those arriving have been barefoot, with their clothing soaked, and covered in mud and snow. Refugees report discarding their belongings to carry their children through flooded countryside to Jordan," he added. "For people arriving at the border, UNHCR managed yesterday to send 1,000 blankets, 500 mattresses along with emergency clothing. Our partners at WFP [UN World Food Programme] also sent 3,000 welcome meals."

In Lebanon, UNHCR and its partners are working to address the floods that have affected various refugee settlements in the country's north, as well as a warehouse housing refugees in the city of Sidon. The agency has also increased the distribution of essential items – such as warm blankets, heater, fuel vouchers, winter clothing and plastic sheeting – to help families face the freezing temperatures. In addition, 6,700 families have had their homes weather-proofed, and renovation help has been provided to 5,300 others.

In Turkey, UNHCR is working with the Turkish Red Crescent to reinforce camps against the winter by providing thousands of winterized tents, electrical heaters and thermal blankets, among other items. However, despite many of the precautions taken, there were two fires last month at different camps which claimed the lives of five children and injured two others.

Heavy snow in Iraq has affected refugees living in the Domiz camp in the Dohuk governorate, Mr. Edwards said. In addition, the prices for basic commodities have increased and there have been shortages of winter medicines and food. UNHCR is currently looking at additional measure to tackle this issue including the provision of cash assistance and construction materials to improve shelters.

In Syria itself, the UN refugee agency continues to provide winterization aid to those who have been internally displaced, and 40 shelters have been set up throughout the country. By the end of 2012, UNHCR had assisted over 400,000 people in accessible areas of the country, providing non-food aid, and in addition cash aid to nearly 15,000 families.

"Despite the difficult security conditions, we are continuing to work to help people where we can – often working through partner organizations," Mr. Edwards added. "However, difficulties of access mean we cannot reach all people in need."