In 1991, conservationists announced with dismay that endangered African wild dogs had gone extinct from the Serengeti-Mara region of east Africa. Now the latest genetic study reveals that this proclamation may have been premature – it turns out they almost certainly didn't go extinct at all. 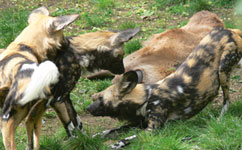 African wild dogs.
A team of UK and US researchers genetically analysed a rare bounty of samples taken both from the dogs before their apparent extinction, and from new packs that naturally re-established in the area ten years later in 2001.

To their surprise, they found that almost all of the new dogs are genetically related to the original Serengeti-Mara population, meaning that some dogs must have persisted undetected in the region after 1991.

'The data suggest that there wasn't complete extinction in the region, which is encouraging,' says Dr Barbara Mable from the University of Glasgow, who led the study