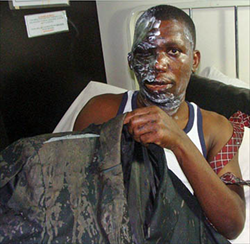 Burns threaten eyesight of church leader who opposed Islamic courts.
KAMPALA, Uganda — Islamic extremists threw acid on a church leader on Christmas Eve shortly after a seven-day revival at his church, leaving him with severe burns that have blinded one eye and threaten sight in the other.

Bishop Umar Mulinde, 37, a sheikh (Islamic teacher) before his conversion to Christianity, was attacked on Saturday night (Dec. 24) outside his Gospel Life Church International building in Namasuba, about 10 kilometers (six miles) outside of Kampala. From his hospital bed in Kampala, he told Compass that he was on his way back to the site for a party with the entire congregation and hundreds of new converts to Christianity when a man who claimed to be a Christian approached him.

“I heard him say in a loud voice, ‘Pastor, pastor,’ and as I made a turn and looked at him, he poured the liquid onto my face as others poured more liquid on my back and then fled away shouting, ‘Allahu akbar [God is greater],’” Mulinde said, still visibly traumatized two days after the assault.

A neighbor and church members rushed him to a hospital in the Mengo area of Kampala, and he was then transferred to International Hospital Kampala.

“I have to continue fighting this pain – it is too much,” Mulinde said. “My entire body is in pain. Most of the night I miss sleep.”

His face, neck and arms bore deep black scars from the acid, and his lips were swollen.

“The burn caused by the acid is so severe that there is an urgent need for specialized treatment,” said area Christian Musa Baluku Symutsangira. “I suggest that he be flown outside the country as soon as possible; otherwise Mulinde might lose both of his eyes, coupled with the spread of the burns. The burns seemed to spread and go very deep. He might need some plastic surgery.”

A doctor told Compass that acid burns cover about 30 percent of his face and has cost him sight in one eye.

“We are doing all we can to save his other remaining eye and to contain the acid from spreading to other parts of the body,” the doctor said.

Mulinde’s shirt, tie and suit were in tatters after the attack.

Mulinde said his father, Id Wasswa, was a local prayer leader or imam.

“I was born into a Muslim family, and although I decided to become a Christian, I have been financially assisting many Muslims, as well as my relatives who are Muslims,” he said. “I have been conducting a peaceful evangelism campaign.”

Mulinde said Muslim extremists opposed to his conversion from Islam and his outspoken opposition of sharia (Islamic law) courts in Uganda, known in East Africa as Kadhi courts, attacked him. On Oct. 15, area Muslim leaders declared a fatwa against him demanding his death.

“I have been receiving several threats for a long time, and this last one is the worst of all,” Mulinde said. “I have bore the marks of Jesus.”

Mulinde is known for debates locally and internationally in which he often challenges Muslims regarding their religion. His extensive knowledge and quotation of the Quran in his preaching has won him enemies and friends. Often criticizing Islam, he has relied on police protection during revival campaigns throughout Uganda.


“Mulinde poses a big threat to those who cannot take the challenge as he engages the Muslims in debate,” said Dr. Joseph Serwadda, an area church leader.

A church guard who was away on the day of the attack said he felt responsible.

Police have reportedly arrested one suspect, whom they have declined to name. A divisional commander at Katwa police station identified only as Kateebe would say only that an investigation was underway.

The hospital charges 350,000 Uganda shillings (US$140 dollars) per day, a steep amount in Uganda.

“We appeal for our brothers and sisters wherever they are to assist the life of Bishop Umar Mulinde,” said Symutsangira.