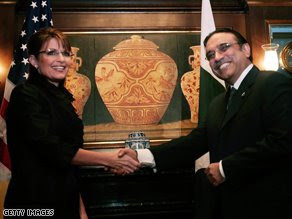 In a Sept. 2008 meeting with the Republican Vice Presidential nominee Sarah Palin, the President of Pakistan may have been overly friendly by Muslim standards.

During the customary greetings between the two leaders, Zardari called Palin “gorgeous” and later even offered “to hug” the Alaskan Governor.

CNN reported that "Asif Ali Zardari, entered the room seconds later. Palin rose to shake his hand, saying she was 'honored' to meet him. Zardari then called her 'gorgeous' and said: 'Now I know why the whole of America is crazy about you.'

'You are so nice,' Palin said, smiling. 'Thank you.' A handler from Zardari’s entourage then told the two politicians to keep shaking hands for the cameras. 'If he’s insisting, I might hug,' Zardari said. Palin smiled politely.

Read a Pakistani's reaction here.
Posted by Alice C. Linsley at 5:45 AM