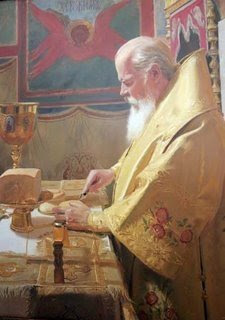 There is no word on the cause of his death at his residence outside Moscow, but he had been sick for some time. No date has been set yet for the funeral.

Alexiy II was credited with helping restore the moral authority of the Russian Orthodox Church after decades of repression under communism.

Favoured by the KGB as he rose through the Church's ranks, he then oversaw its post-communist revival.

However, relations with the Roman Catholic Church remained frosty and he repeatedly refused to meet the late Pope John Paul II, or his successor, Benedict XVI.

He's been ruthless in suppressing alternative views in the Orthodox church

The Russian Orthodox Church counts nearly 70% of Russia's population - about 100 million people - among its members.

Former Soviet leader Mikhail Gorbachev said he was shocked by the death. "I respected him deeply," he said.

A spokesman for Russian President Dmitry Medvedev said he would return to Russia from India on Friday, cancelling a planned trip to Italy.

Born Alexei Rediger to a Russian Orthodox family living in Estonia in 1929, the future patriarch rose swiftly through the ranks of the Church after studying theology in St Petersburg. By the age of 32 he was a bishop, by 35 an archbishop.

May his memory be eternal!

(On Sunday, 21 December, Patriarch Alexy was to have lead a three-hour festal Divine Liturgy at the St. Nicholas Cathedral in Vienna, concelebrating with 14 Orthodox bishops.)
Posted by Alice C. Linsley at 4:16 AM