Einstein Was Right About Education 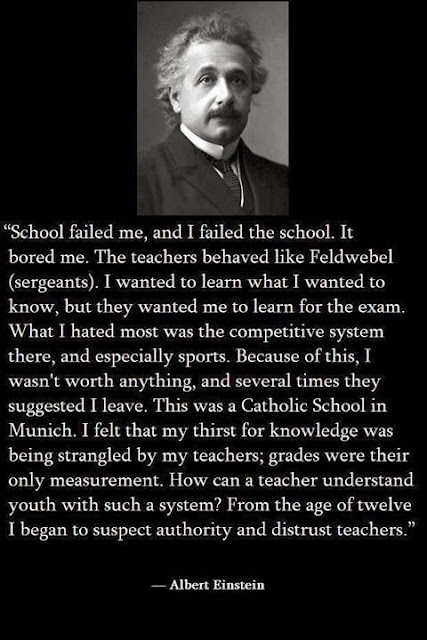 As the American historian Thomas Kuhn demonstrated in his book The Structure of Scientific Revolutions, the great breakthroughs in science were made by individuals: Kepler, Galileo, Newton, and Einstein are examples. None were part of a scientific community. Add to this list Darwin, Marx, and Freud, none of whom were academics working within institutions. All brought about a “paradigm shift” that would greatly influence the shape, perspective, and development of new fields.

A prime example of the contribution of individuals to science is Antony van Leeuwenhoek (1632-1723). He came from a family of Dutch tradesmen and never attended the university. He was not part of the scientific community. Yet his curiosity and hard work led Leeuwenhoek to some of the most important discoveries in the history of biology. He discovered bacteria, free-living and parasitic microscopic protists, sperm cells, blood cells, and microscopic nematodes and rotifers. His research radically changed world awareness of microscopic organisms and led to more sanitary conditions in hospitals and homes.

Today we speak of innovators like Kepler and Leeuwenhoek as people who “stepped out of the box.” These individuals were more concerned with discovery than with what people thought of them. They were not afraid to take risks, to ask questions, to pursue true knowledge.

American school do not encourage people like this. They are founded on principles put forth by the Neo-Hegelian Pragmatist John Dewey. Dewey was determined that American education should be based on his materialist evolutionary worldview. His approach had the effect of enshrining Darwin in the public schools and blocking metaphysical inquiry. Without metaphysics there is no means of integrating the subjects taught in schools. Students learn content in various subjects. However, there is no means of integrating learning so much that is learned is lost.

The English writer, Dorothy L. Sayers, noted in her 1947 speech “The Lost Tools of Learning” that the dismissal of metaphysics from modern education has resulted in students learning more, but knowing less than students under Scholasticism when metaphysics was still part of education. She showed that teaching less in more subjects prolongs intellectual childhood because students are not given the tools for mature (lifelong) learning. Sayers’ speech has had a great influence on the ever expanding classical education movement in America.

An honest assessment of American public education suggests that grades motive more than the desire to learn. Politics plays a greater role in educational policy than sound educational research. At the university level, peer review has the effect of diminishing the influence of paradigm-shifters. More honorary degrees are given to celebrities and politicians than to scholars who make authentic contributions to human knowledge. Every American university has been influenced by Pragmatism. The list of scholars and institutions appears here, but this is by no means a comprehensive list.

An astute critic of Dewey’s “instrumental pragmatism” was the English writer G.K. Chesterton who wrote about the “suicide of thought” in modernism. He appreciated logical thought and empirical evidence, but not the idolatry of scientism. He wrote, “This bald summary of the thought-destroying forces of our time would not be complete without some reference to pragmatism; for though I have here used and should everywhere defend the pragmatist method as a preliminary guide to truth, there is an extreme application of it which involves the absence of all truth whatever.”

Einstein was right about education, in that schools tend to focus on grades and exams, instead of learning for the sake of learning.

Hopefully, new educational trends -- such as charter schools and online courses -- will serve as harbingers for learning because a student wants to know something, and not learning in order to pass an exam or to receive a high grade in a course.

Until that day occurs, education will continue to fail with respect to students' creativity and search for knowledge, with the primary goal of education remaining to be on grades instead of learning for the sake knowledge and understanding.