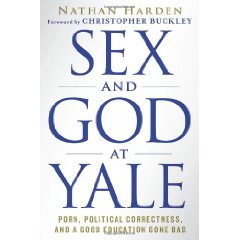 One might understand, given this unlikely story, why Nathan Harden might have been induced to write such a book as Sex and God at Yale. At heart, this book—like William F. Buckley’s God and Man at Yale, from which it draws its title—is the autobiographical account of a Yale student who felt betrayed by his institution, an institution he had long dreamed of attending. He had expected learning, culture, and all the best of Western Civilization. Instead, he received a cheap hodgepodge of multiculturalism, gender studies, and Sex Week—free condoms, vibrators, and porn. If Nathan Harden sounds angry in these pages, that is because he is. The book’s excesses might best be chalked up to a righteous indignation.

Harden’s main argument is that because Yale has abandoned its purpose of raising up young men and women to the greater glory of God and country, it has succumbed to the worst of mankind’s sins in the name of critical thinking and political correctness. The book thoroughly details Harden’s depressing experience at Yale—the “hook-up culture” taken to new extremes, Yale’s naked parties, professors sleeping with students, pornographic films shown in class in the name of cultural studies.