Protests continue in the Turkish cities of Ankara and Istanbul. Riot police were called out and used tear gas against the protesters in Gezi Park. In the western city of Izmir police raided the houses of dozens of students and took them into custody for sharing this photo via Twitter. 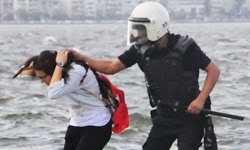 The picture is taken from a video (02.06.2013 İzmir Gündoğdu Meydanı polis müdahale) that shows a policeman randomly and violently pulling the hair of passerby girl who had done nothing wrong.

Even the Turkish media was targeted, though it has remained silent about the abuse.

Reuters' photojournalist Osman Orsal was seriously injured when he was hit on the head by a tear gas grenade last Friday. He was near the French consulate in the Beyoglu district at the time and was taken to Taksim Hospital where he received nine stitches. His condition is reported to be improving.

The riots are turning into an anti-government protest movement and two people have been killed and many injured among participants and observers,” the press freedom organization said. “We regret that, despite many appeals for calm made since late last week and the partial withdrawal of police from Istanbul's Taksim Square, police violence has continued.

Orsal took the photograph that symbolises the police crackdown on the Gezi Park occupation.

Erhan Karadag, a journalist with the privately-owned national TV station Kanal D, was questioned by police in Ankara on Saturday night on the grounds that he was believed to support the protests in the capital. He was held at Ankara security headquarters and released the next day. His lawyer said he was detained for taking milk to the demonstrators so they could use it on their faces to soothe the effects of tear gas.

Ahmet Sik, who was hit on the head on Friday, left hospital the next day, after his wound was stitched. His stitches will be removed after 10 days.

Reporters Without Borders condemns the brutal police action against media workers covering the Gezi Park protests in Istanbul. We understand that 14 journalists have been injured, some seriously, since the protests began in Istanbul and elsewhere. Dozens of other people have been affected by tear gas, which has been used widely against the protesters.

“We strongly condemn the deliberate targeting of journalists by the police during the protests. In common with dozens of organizations, including the Journalists' Association of Turkey, we express our outrage. We call for the safety of journalists covering the protests to be guaranteed and for the protest movement to be treated fairly impartially by government media.”