The astrophotographer Thierry Legault took this beautiful picture on the northwest coast of France on May 36, 2013. The image shows a triple conjunction involving the planets Jupiter, Venus, and Mercury. 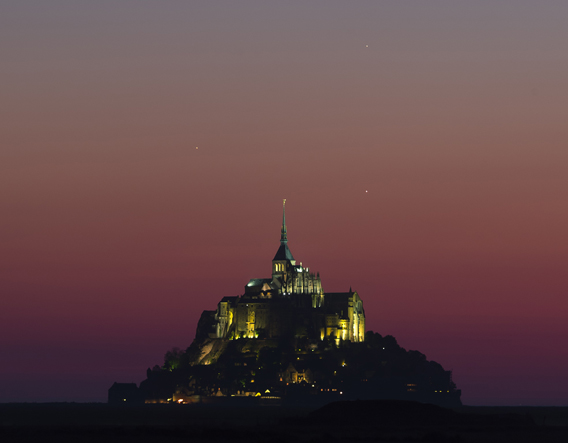 David Grinspoon, a NASA astronomer and the author of a history of Venus observation, offered the following summary of the ancients' preoccupation with Venus:

"Venus must always have seemed a unique, animated entity. For our ancestors the details of the complex movements of Venus served as important harbingers of war and peace, feast and famine, pestilence and health. They learned to watch every nuance for the clues they could wrest of what nature had in store. They watched carefully, obsessively, through skies not yet dimmed by industrial haze and city lights, and they learned to predict accurately, for years and decades to come, the rising, setting, dimming, brightening, and looping of Venus."

By 4245 BC, the Horite priests of the Nile had already established a calendar based on the appearance of the star Sirius that becomes visible to the naked eye once every 1,461 years. Apparently, Nilotes had been tracking this star and connecting it to seasonal changes and agriculture for thousands of years. This is verified by the Priest Manetho who reported in his history (241 BC) that Nilotic Africans had been “star-gazing” as early as 40,000 years ago. Plato, who studied in Egypt, claimed that the Africans had been tracking the heavens for 10,000 years.

The ancient Kushite astronomers would make much of this conjunction in the West. Jupiter represents the King and Creator of the universe. Mars represents "Horus the Red" (Hor Dshr), and Venus is the emblem of Hathor-Meri, the virgin queen who brought forth Horus, the Seed of Ra. We have the divine Triad of the Horites. The west is the direction of the future.