Is Ahmadinejad's fiery speech before the UN a "prophecy" he intends to bring to fulfillment? 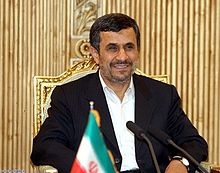 Iranian President Mahmoud Ahmadinejad on Wednesday called for the end of the “hegemonic” powers of the United States and Israel, whom he described as “the uncivilized Zionists.” He said the world would ”soon” see new “global management” by the Twelfth Imam, also known as the “Mahdi,” and his deputy, Jesus Christ.

This was Ahmadinejad’s eighth and likely final annual address to the opening fall session of the United Nations General Assembly. He is expected to finish his second term in office in June 2013. In each of his past U.N. speeches, he prayed for the soon coming of the so-called Islamic messiah. This time he went much further, offering his most detailed explanation to date of his Shia Islamic eschatology (End Times theology) and his understanding of the coming rule of the Twelfth Imam.

Ahmadinejad told the leaders of the world gathered in Manhattan that he had come this time “to voice the divine and humanitarian message…to you and to the whole world.”


It is disturbing that the President of the United States speaks against Iranian Nukes, but not against this incendiary kind of speech. When Obama said that the future doesn't belong to those blaspheme the Prophet, was he saying that those who are not Islamic have no future; should this be taken as a threat?


Related reading: Ahmadinejad: Mideast without Israel and US