In the ancient world, priests' daughters, widows, and indentured virgins lived at temples and shrines. This provided a better way of life for women who might otherwise be destitute.

The custom is observed today in Africa and in India. Poor parents may chose to give their daughters to the local shrine of temple as a servant. In India, low caste girls are sometimes dedicated to the temple. These are called Devadasi (Deva - God and Dasi - female servant). They are sexually exploited and despised, but they can acquire status by joining the Yellama cult which confers power and responsibility. One of the most important duties of the Devadasi is the performance of votive dances in the temple. 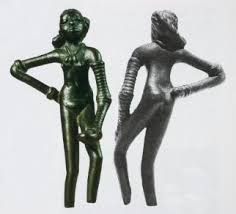 This Harappan dancing girl of the Indus Valley resembles the dancing girls of ancient Nubia.
Some women gain patrons and are able to buy their way out of the system. Patrons often set them women up as inn keepers. Professional dancers worked in these inns. That was the case in ancient Nubia and Harappa, and continues in modern Ethiopia where the women dance in coffee houses. (See Egypt and Nubia by James Augustus Saint John, pages 240-242).

This may be the situation with the biblical figure Rahab. Different biblical sources use different Hebrew words to describe Rahab. One refers to a sacred prostitute, and the other to an inn keeper. The first word is qādēš and the second is the radical zn. Leah Bronner notes that the ZN root could refer to zona (one who sells her body) or to the word zon, an inn keeper. D. J. Wiseman points out that tzond can be translated as barmaid. Rahab married Salmon, a Horite Hebrew chief.

In West Africa, women consult deities at the water shrines in order to have children. These children are often pledged to the shrine or to the deity (as Hannah pledged Samuel to God in return for blessing her with a child). Osofu Ahadzi, a director of one such shrine, says that people who fail to redeem such pledges eventually lose those children. Ahadzi explains, “If there is a calamity befalling a family and they go back to the divinity or shrine and it is said that such a person should be trained in the shrine to learn the skills and acquire the power of divination to protect the family, that is when that person is devoted to the shrine."
Ahadzi says that men may not marry a trokosi (indentured girl) without permission from the shrine. This is because the girls are regarded as spirit wives of the deity. He said marrying a trokosi without going through the proper procedure will attract severe punishment.

“There was a situation where the divinity asked one of the keepers not to marry this woman and he decided to go forward and marry. He thought that he was powerful and he went ahead and married. The mother died, he was going and the car had an accident. He died with his wife. In the traditional African religion the commandment is thou must not do this, if you do that you will get your punishment,” he said.

Ahadzi says, “It is completely out of place for anybody to claim that the keeper of the shrine plays around with the girls. You can’t do that. When you go against any of the regulations, it is not human beings that will punish you. The deity will punish you because all the girls who go in there for training are the daughters and princesses of the divinity. So if you take liberties with them you will be punished,” he said.

He believes that the girls, some of whom are as young as age 2, have a good life at the shrine, although they do not receive a formal education.

Ahadzi said the girls are not taken advantage of even though they are used as free labor on the farms. He said the chores they perform can be likened to what students are made to do in boarding schools. 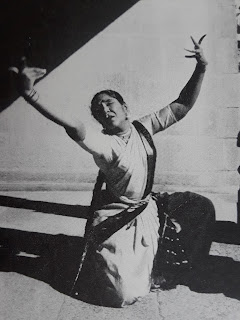 Hindu temple dancer performs traditional hand language called "Mudra".
Similar practices are evident at Hindu temples. Dr. Shabhash C. Sharma writes, "Regarding the treatment of people (including the young girls and widows) in shelters, temples and orphanages, Hinduism is quite emphatic in its opposition to any abuse and exploitation at the hands of those in positions of power and authority: 'He who betrays one who has sought refuge, will meet destruction. The very earth will not let the seed that he sows sprout.'"

Dr. Sharma further explains: "Sometimes even if the parents of a young girl or boy are alive, they might not be in a good socio-economic condition to take care of their kid and thus could decide to send her/him to live in a temple thinking that the temple would do a better job in raising their child. Thus the temple might be considered by some people an ideal place to raise their child where free room, board and education (in spirituality, arts, music, dancing etc.) are available, perhaps in return for a small or light physical service to the temple."

Dr Sharma says: "The same type of consideration, as indicated above for young girls, is generally applicable to adult women, especially the widows, when they decide to live in temples and religious places like Vrindavan. Note that even though the widows living in such places (temples etc.) might number in several thousand they still represent an extremely small minority relative to millions of Indian widows..."

Even the daughters of rich families and royalty have been dedicated to the temple, shrine, or to the Church. Royal virgins posed both potential trouble and opportunity for rulers. Marriage was a way to form alliances between royal families and kingdoms. Sometimes rulers sought to avoid alliances and refused to give their royal daughters in marriage, and at other times such arrangements were politically advantageous. In some cases, the virgins themselves appear to have sought the ruler’s protection from marriages they found displeasing. One way to escape undesired marriages was to enter the convent and to become a "bride of Christ."

In the Middle Ages, many royal daughters were destined for the monastic life. Only in circumstances of political advantage were their marriages allowed. Not surprisingly, female convents sprung up in all the regions were monarchs had residences. Some royal women lived saintly lives in the monasteries and others lived much as they had in their father’s palaces. The rich and powerful royal abbeys of Europe provided a luxurious lifestyle for the women who resided there.

The precedent for placing a royal daughter at a temple is found as early as the reign of Sargon (c. 2334-2284 BC). He appointed his daughter Heduanna as the En (Mistress-in-charge) of the shrine at Ur. En-Heduanna is credited with a large body of cuneiform poetry.

Likewise, some royal Egyptian daughters were appointed to the two highest positions a woman could hold: the positions of the God’s Wife (Hemet Netjer) and the Divine Adoratrice (Duat Netjer).

Pharaoh Ahmose’s principal wife was appointed to the office of the God’s Wife of Amun, and Ahmose endowed the office with more than adequate means, providing financial income, servants, real estate, and her own royal retinue. Many royal women attained high rank as priestesses in charge of Hathor shrines. The celibacy requirement for royal daughters dedicated to the temples and shrines certainly had religious significance, but it also served the ruler’s political purposes. Were some political advantage to be gained, the holders of the offices might be granted permission to marry.
Social reforms that benefited women were introduced when Christianity became institutionalized under Emperor Justinian (482-556 AD). The Imperial Code criminalized cultic prostitution and the practice of fathers selling their daughters into slavery. Noble women were able to exercise political power.
Related reading: Slaves of Circumstance: Devadasi; Denying Marriage: A Cunning Royal Strategy
Posted by Alice C. Linsley at 9:43 AM

Email ThisBlogThis!Share to TwitterShare to FacebookShare to Pinterest
Labels: women